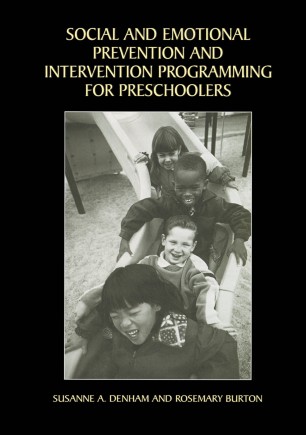 Social and Emotional Prevention and Intervention Programming for Preschoolers

Social and Emotional Prevention and Intervention Programming for Preschoolers rests on the idea that young children, under optimal circumstances, develop substantial abilities in social and emotional domains by the time they enter school. These abilities contribute to their success and well-being during these early years, but even more importantly, to both their successful adaptation to school (personal and academic) and their long-term mental health.

The chapters of this volume present theoretical foundations for and explanations of what important adults in young children's lives - preschool teachers, daycare providers, parents - can do to encourage the development of such social-emotional abilities, including promoting secure attachment relationships, providing positive behavior guidance, and assisting children in developing emotion knowledge, emotion regulation, social problem-solving skills, and other positive social behaviors.

In addition, the book reviews the current state of early childhood programming in each of these crucial areas, with the addition of a chapter on emergent parent programming on emotion coaching. Recommendations are made for making such programming work, for assessing individual children's development and program efficacy, and necessary future directions for this area are detailed.

Susanne Denham received her Ph.D. in applied developmental psychology in 1985, after 11 years as a school psychologist. Her research involves social-emotional development, particularly in preschoolers. She is following a longitudinal sample of children she has known since age 3 – examining their emotional competence, its socialization, and its contribution to social competence – and is also studying a little-studied aspect of children’s development – forgiveness. With Dr. Burton, she spearheaded a successful social-emotional prevention program for daycare children in Northern Virginia in the early 1990s.

Rosemary Burton received her Ph.D. in education in 1995, after years as both an early childhood teacher and daycare director. She trains myriad teachers in her role as director of operations for Minnieland Private Day Schools throughout several states, as well as in her role as community college professor, and in these roles has promoted social-emotional prevention and intervention programming for preschoolers as a vital enterprise.