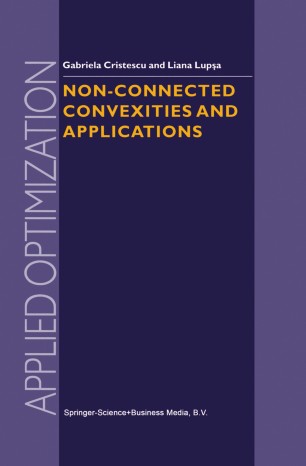 Lectori salutem! The kind reader opens the book that its authors would have liked to read it themselves, but it was not written yet. Then, their only choice was to write this book, to fill a gap in the mathematicalliterature. The idea of convexity has appeared in the human mind since the antiquity and its fertility has led to a huge diversity of notions and of applications. A student intending a thoroughgoing study of convexity has the sensation of swimming into an ocean. It is due to two reasons: the first one is the great number of properties and applications of the classical convexity and second one is the great number of generalisations for various purposes. As a consequence, a tendency of writing huge books guiding the reader in convexity appeared during the last twenty years (for example, the books of P. M. Gruber and J. M. Willis (1993) and R. J. Webster (1994)). Another last years' tendency is to order, from some point of view, as many convexity notions as possible (for example, the book of I. Singer (1997)). These approaches to the domain of convexity follow the previous point of view of axiomatizing it (A. Ghika (1955), W. Prenowitz (1961), D. Voiculescu (1967), V. W. Bryant and R. J. Webster (1969)). Following this last tendency, our book proposes to the reader two classifications of convexity properties for sets, both of them starting from the internal mechanism of defining them.