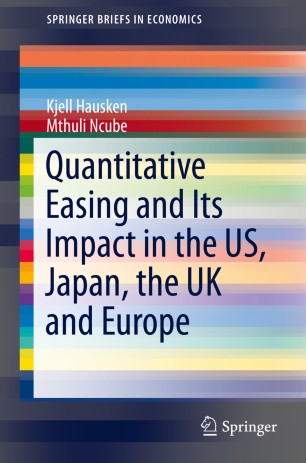 Quantitative Easing and Its Impact in the US, Japan, the UK and Europe

This volume empirically analyzes the effects of quantitative easing (QE) on interest rates and the economy in the US, Japan, UK and Europe. Using an event-study methodology, the authors find that the measures undertaken by the Federal Reserve and Bank of England, which focus primarily on bond purchases, are much more effective in lowering interest rates than those undertaken by the Bank of Japan and the European Central Bank, which have relied more heavily on lending to private financial institutions. Using large Bayesian vector autoregression (BVAR) models they also analyze the impact of QE on the wider economy. They produce no-QE counterfactual forecasts that are compared with their corresponding baseline forecasts, incorporating the effects of QE on government bond spreads. Despite the failure of stimulating economic activities as a whole, the simulation results suggest that the unconventional monetary policies have a positive influence on industrial production in the US, UK and Japan. The authors’ analysis finds that QE contributes to the reduction in unemployment in the US and Japan, and a rise in inflation-expectations in the US, UK and Euro zone. However, evidence on QE’s effect on house prices, stock prices, consumer confidence, and exchange rate, is mixed and thus inconclusive.