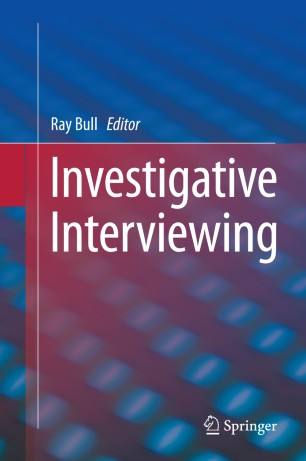 Between news stories of coerced confessions and the over-the-top interrogations shown in crime dramas, there seems to be no end of wrong ways to question suspects. And as wrong as these methods are, they are equally counterproductive when the resulting statements are based on questioners' assumptions rather than the truth.

The expert pages of Investigative Interviewing model an approach that reflects an ethical base – emphasizing persuasion rather than coercion – as well as the evidence base. International in scope, this innovative volume reflects sophisticated new interview methods and often surprising findings on the psychology of suspects, victims, witnesses, and law enforcement personnel. Topics cross criminal justice settings and contexts, such as when information should be disclosed to suspects, how interviews are conducted in international tribunals, and the emerging concept of human intelligence interviewing. Taken together, these chapters are a leading-edge guide to obtaining statements that stand up as reliable evidence. Included in the coverage:

Suited to the researcher and the educator as well as the frontline professional, Investigative Interviewing heralds a major advance in forensics: education and training programs rooted in best practices for more effective interviewing--and consigning excessive interrogations to the fiction writers.

Ray Bull is Professor of Criminal Investigation (part-time) at The University of Derby.  He is also Emeritus Professor of Forensic Psychology at the University of Leicester, Visiting Professor at the Universities of Portsmouth and of London South Bank.  His major research topic is investigative interviewing.  In 2012 he was elected ‘President-Elect’ of the European Association of Psychology and Law.  In 2012 he was made the first Honorary Life Member of the International Investigative Interviewing Research Group.  In 2010 he was “Elected by acclaim” an Honorary Fellow of the British Psychological Society “for the contribution made to the discipline of psychology” (this honour is restricted to a maximum of 40 living psychologists).  In 2010 he received from the Scientific Committee of the Fourth International Conference on Investigative Interviewing a “Special Prize” for his “extensive contributions to investigative interviewing”.  In 2009 he was elected a Fellow by the Board of Directors of the Association of Psychological Sciences (formerly the American Psychological Society) for “sustained and outstanding distinguished contribution to psychological science” (FAPS).  In 2009 Ray received from the 'International Investigative Interviewing Research Group' the 'Senior Academic Award' for his 'significant lifetime contribution to the field of investigative interviewing'.  In 2008 Ray received from the European Association of Psychology and Law the ‘Award for Life-time Contribution to Psychology and Law’.  In 2005 he received a Commendation from the London Metropolitan Police for “Innovation and professionalism whilst assisting a complex rape investigation”.  He has advised a large number of police forces in several countries on the interviewing of persons of interest, suspects, witnesses and victims, and he has testified as an expert witness in a considerable number of trials.  He has authored and co-authored a large number of papers in quality research journals and has co-authored and co-edited many books including Investigative Interviewing: Psychology and Practice (1999 – a second edition is now being written) and Witness Identification in Criminal Cases (2008).  He has been an invited speaker at a variety of meetings around the world.  In recognition of the quality and extent of his research publications he was in 1995 awarded a higher doctorate (Doctor of Science).