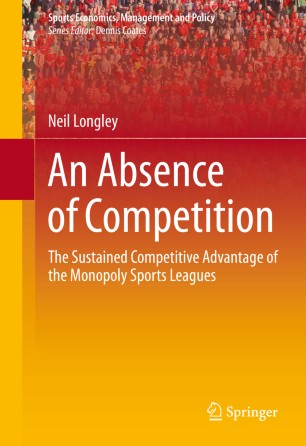 An Absence of Competition

The Sustained Competitive Advantage of the Monopoly Sports Leagues

This book takes a multi-disciplinary approach to analyzing the nature of “competition” and “competitive advantage” within the U.S. pro sport industry. By many measures, the four major pro sports leagues in the U.S.–the National Football League (NFL), National Basketball Association (NBA), National Hockey League (NHL), and Major League Baseball (MLB)–are now some of the most successful business entities in the country. Not coincidental to this success is the fact that all four of these leagues currently operate as monopolies. While all have faced rival leagues at some point or another in their existence, all were able to successfully dispense with these rivals. Because of the inability of any rival leagues to survive as a long-term force, it has been monopoly, and not competition, that has been the prevailing market structure in the industry. In fact, in recent decades, the monopoly position of the Big Four appears increasingly impenetrable–none have faced a credible threat from a rival league since the demise of the United States Football League (USFL) in the mid-1980s.

Within this context, the book seeks to explore the nature of the competitive advantage that these leagues apparently possess. The book takes an evolutionary approach, in that it argues that the monopoly position of each of the four leagues today cannot be explained in an insular, static, manner, but is the culmination of many dynamic processes through many decades. Today’s monopoly market structures are what could be termed path-dependent–they did not simply “happen,” but are instead a complex function of everything that has occurred up to this point.

A key contribution of the book is that it analyzes these issues from three alternate theoretical perspectives–the traditional economics approach, the public choice approach, and the strategic management approach. It argues that no single conceptual approach can, in itself, adequately explain the full richness of the issue, and that these various approaches should be viewed as complements, rather than as being mutually exclusive. The multi-disciplinary nature of the issue should make the book of interest to scholars in a number of fields, including strategic management, sport management, and economics. It can serve as an effective teaching tool in both graduate and upper-level undergraduate courses for students in these fields, and is particularly useful for faculties seeking to emphasize to their students the importance of a multi-disciplinary, integrative, approach when analyzing business and management issues. The book may also be of interest to leaders within the sport industry itself, and will help to provide insight and perspective as leagues seek to enhance their competitive advantage in the marketplace.

Neil Longley has both an MBA and a PhD in Economics and has published 23 articles in peer-reviewed academic journals during his career, along with five chapters in edited scholarly books. His research has spanned several areas in applied microeconomics: public choice, public finance, labor economics, international trade, and sports economics. With the latter, his research pertaining to labor market discrimination in sports has been particularly influential, and has significantly impacted the direction of the literature in that area. His research has appeared in such journals as Applied Economics Letters, Public Choice, Contemporary Economic Policy, Atlantic Economic Journal, American Journal of Economics and Sociology, Journal of Sports Economics, and Managerial and Decision Economics, to name a few. Most recently, he had an article (co-authored with Leo Kahane and Rob Simmons) accepted for publication in the prestigious Review of Economics and Statistics. The paper uses a sport setting to examine the extent to which co-worker heterogeneity impacts firm-level output. Longley was the recipient of the 2010-11 “Outstanding Research Award” in the Isenberg School of Management, out of approximately 125 full-time faculty in the School.