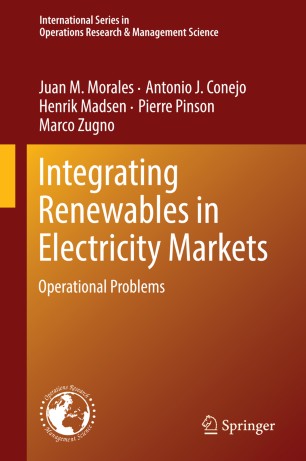 This addition to the ISOR series addresses the analytics of the operations of electric energy systems with increasing penetration of stochastic renewable production facilities, such as wind- and solar-based generation units.

As stochastic renewable production units become ubiquitous throughout electric energy systems, an increasing level of flexible backup provided by non-stochastic units and other system agents is needed if supply security and quality are to be maintained.

Within the context above, this book provides up-to-date analytical tools to address challenging operational problems such as:

This book is written in a modular and tutorial manner and includes many illustrative examples to facilitate its comprehension. It is intended for advanced undergraduate and graduate students in the fields of electric energy systems, applied mathematics and economics. Practitioners in the electric energy sector will benefit as well from the concepts and techniques explained in this book.

Juan M. Morales received his M.Sc. degree in Industrial Engineering from the University of Málaga and his Ph.D. in Electrical Engineering from the University of Castilla – La Mancha, Spain. Since 2013 he is an associate professor in Stochastic Optimization in Energy Systems in the Department of Applied Mathematics and Computer Science at the Technical University of Denmark. His research interests include mathematical programming and techniques of optimization under uncertainty, decision making, hierarchical optimization, renewable energies and energy economics.

Henrik Madsen received his M.Sc. (1982) and PhD (1986) in Statistics from the Technical University of Denmark (DTU). His research interests include forecasting of wind and solar power, time series analysis, and estimation of parameters in stochastic differential equations for physical modeling. Since 1999 he has been a full professor in Stochastic Dynamical Systems.

Pierre Pinson received his M.Sc. in Applied Mathematics from the National Institute of Applied Sciences, Toulouse, and his Ph.D. in Energetics from the Ecole des Mines de Paris. He is the Professor in Modelling of Electricity Markets at the Technical University of Denmark, Dpt. of Electrical Engineering. His research interests include statistical modelling; forecasting; stochastic optimization; decision making under uncertainty; renewable energies; meteorology; energy management; and energy trading.

Marco Zugno received the M.Sc. degree in Electrical Engineering from the Technical University of Denmark (DTU) and the M.Sc. degree in Automation Engineering from the University of Padua, Italy. He holds a Ph.D. degree obtained from the department of Applied Mathematics and Computer Science at DTU. He is currently a postdoctoral researcher with the same department. His research interests include electricity market modeling; stochastic programming; robust optimization; and hierarchical optimization.