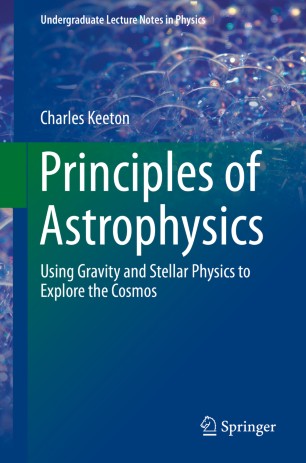 Using Gravity and Stellar Physics to Explore the Cosmos

This book gives a survey of astrophysics at the advanced undergraduate level.  It originates from a two-semester course sequence at Rutgers University that is meant to appeal not only to astrophysics students but also more broadly to physics and engineering students.  The organization is driven more by physics than by astronomy; in other words, topics are first developed in physics and then applied to astronomical systems that can be investigated, rather than the other way around.

The first half of the book focuses on gravity.  Gravity is the dominant force in many astronomical systems, so a tremendous amount can be learned by studying gravity, motion and mass.  The theme in this part of the book, as well as throughout astrophysics, is using motion to investigate mass.  The goal of Chapters 2-11 is to develop a progressively richer understanding of gravity as it applies to objects ranging from planets and moons to galaxies and the universe as a whole. The second half uses other aspects of physics to address one of the big questions.   While “Why are we here?” lies beyond the realm of physics, a closely related question is within our reach: “How did we get here?”  The goal of Chapters 12-21 is to understand the physics behind the  remarkable story of how the Universe, Earth and life were formed. This book assumes familiarity with vector calculus and introductory physics (mechanics, electromagnetism, gas physics and atomic physics); however, all of the physics topics are reviewed as they come up (and vital aspects of vector calculus are reviewed in the Appendix).

This volume is aimed at undergraduate students majoring in astrophysics, physics or engineering.

“The book is divided into two parts, each part corresponding to a one semester course. … This book is an excellent introduction to astrophysics. It can be used as a text for courses on the subject. Problems are included at the end of each chapter with solutions in the back. Also, each chapter ends with a list of references for further study.” (Stephen Wollman, zbMATH, Vol. 1302, 2015)
Buy options