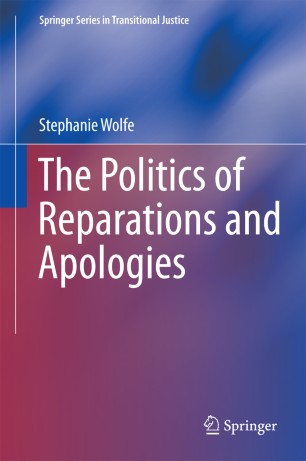 The Politics of Reparations and Apologies

The Politics of Reparations and Apologies examines the evolution and dynamics of reparation politics and justice.   The volume introduces the key concepts, theories, and terms associated with social movements and in particular, the redress and reparation movement (RRM).  Drawing  from RRMs that have their foundation in World War  II--the   German  genocides,  the   United  States  internments,  and  the  Japanese  “comfort   women” system--  the volume explores each case study’s relative success or failure in achieving its goals and argues that there are overarching trends that can explain success and failure more generally in the RRM movement. Using the backdrop of international criminal law and normative concepts of reparations, the volume establishes and  analyzes the roles of reparations and apologies in obtaining transitional justice.

In each case study, there is a detailed rundown of the political actions that were attempted to obtain redress and reparation for the victims, of how successful the attempts were, and of the crucial factors which influenced the relative success or failure. Crucially, the volume offers a comparative framework of the actions that contribute to a successful outcome for transitional justice.  With the increasing normative expectation of justice in post-conflict situations, this volume is a valuable resource for researchers in international affairs, human rights, political science, and conflict studies.

Stephanie Wolfe, PhD., is an Assistant Professor at Weber State University, Utah. She received her PhD in International Relations at the University of Kent in Brussels, Belgium. She specializes in international relations, genocide, crimes against humanity and human rights. Her latest field research has taken her to Rwanda to work with Never Again Rwanda’s peace-building institute, South Korea in relation to the comfort women issue, as well as visiting United States based WWII internment camps.

“Stephanie Wolfe’s book explores how states come to terms with their involvement in past atrocities and how they respond to demands for reparation. … this book is recommended to practitioners and academics in this field.” (Benoît Mayer, Journal of International Criminal Justice, Vol. 13 (2), May, 2015)