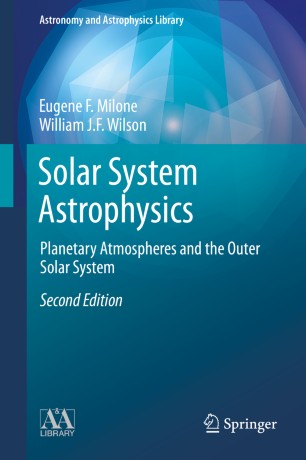 The second edition of Solar System Astrophysics: Planetary Atmospheres and the Outer Solar System provides a timely update of our knowledge of planetary atmospheres and the bodies of the outer solar system and their analogs in other planetary systems. This volume begins with an expanded treatment of the physics, chemistry, and meteorology of the atmospheres of the Earth, Venus, and Mars, moving on to their magnetospheres and then to a full discussion of the gas and ice giants and their properties. From here, attention switches to the small bodies of the solar system, beginning with the natural satellites. Then comets, meteors, meteorites, and asteroids are discussed in order, and the volume concludes with the origin and evolution of our solar system. Finally, a fully revised section on extrasolar planetary systems puts the development of our system in a wider and increasingly well understood galactic context.

All of the material is presented within a framework of historical importance. This book and its sister volume, Solar System Astrophysics: Background Science and the Inner Solar system, are pedagogically well written, providing clearly illustrated explanations, for example, of such topics as the numerical integration of the Adams-Williamson equation, the equations of state in planetary interiors and atmospheres, Maxwell’s equations as applied to planetary ionospheres and magnetospheres, and the physics and chemistry of the Habitable Zone in planetary systems.

Together, the volumes form a comprehensive text for any university course that aims to deal with all aspects of solar and extra-solar planetary systems.  They will appeal separately to the intellectually curious who would like to know just how far our knowledge of the solar system has progressed in recent years.