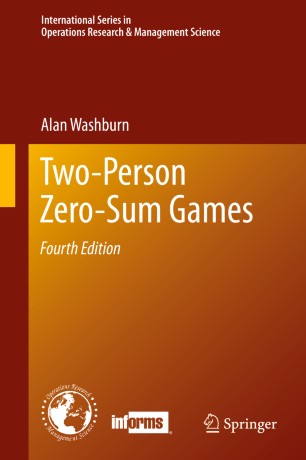 Two-person zero-sum game theory deals with situations that are perfectly competitive—there are exactly two decision makers for whom there is no possibility of cooperation or compromise. It is the most fundamental part of game theory, and the part most commonly applied. There are diverse applications to military battles, sports, parlor games, economics and politics. The theory was born in World War II, and has by now matured into a significant and tractable body of knowledge about competitive decision making. The advent of modern, powerful computers has enabled the solution of many games that were once beyond computational reach.

Two-Person Zero-Sum Games, 4th Ed. offers an up-to-date introduction to the subject, especially its computational aspects. Any finite game can be solved by the brute force method of enumerating all possible strategies and then applying linear programming. The trouble is that many interesting games have far too many strategies to enumerate, even with the aid of computers. After introducing ideas, terminology, and the brute force method in the initial chapters, the rest of the book is devoted to classes of games that can be solved without enumerating every strategy. Numerous examples are given, as well as an extensive set of exercises. Many of the exercises are keyed to sheets of an included Excel workbook that can be freely downloaded from the SpringerExtras website. This new edition can be used as either a reference book or as a textbook.

“An excellent and properly expansive look at TPZS games, this book is a suitable textbook for classes in game theory. There are exercises at the end of the chapters with solutions to all included in an appendix” (Charles Ashbacher, MAA Reviews, March, 2014)