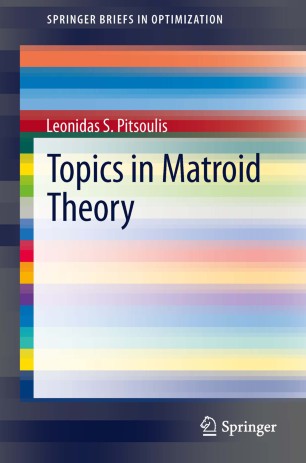 Part of the SpringerBriefs in Optimization book series (BRIEFSOPTI)

Topics in Matroid Theory provides a brief introduction to matroid theory with an emphasis on algorithmic consequences.Matroid theory is at the heart of combinatorial optimization and has attracted various pioneers such as Edmonds, Tutte, Cunningham and Lawler among others. Matroid theory encompasses matrices, graphs and other combinatorial entities under a common, solid algebraic framework, thereby providing the analytical tools to solve related difficult algorithmic problems. The monograph contains a rigorous axiomatic definition of matroids along with other necessary concepts such as duality, minors, connectivity and representability as demonstrated in matrices, graphs and transversals. The author also presents a deep decomposition result in matroid theory that provides  a structural characterization of graphic matroids, and show how this can be extended to signed-graphic matroids, as well as the immediate algorithmic consequences.