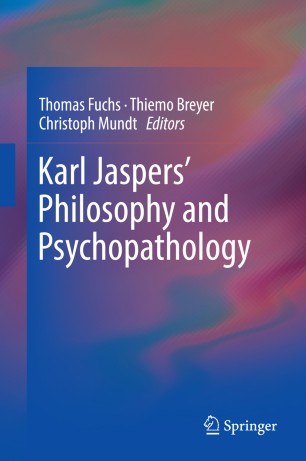 How much of mental illness is in the brain? The mind? Why does it matter?
A century after his groundbreaking General Psychopathology, the work of Karl Jaspers remains relevant and timely. Then, as now, advances in neuroscience are revolutionizing psychology, resulting in a precarious balance between brain and mind.

The papers in Karl Jaspers’ Philosophy and Psychopathology revisit Jaspers' ideas and methods in light of contemporary thinking and offer insights on how these may inform approaches to theoretical discourse and clinical practice. Working to bridge psychiatry and medicine, organizing a classification system for mental disorders, and rejecting dogmatic formulas in favor of respecting client experience, he emerges as a translator as well as a transmitter of clinical ideas. Through these chapters, he continues to remind his peers to never lose sight of the patient as human, and the brain--so often in danger of being reduced to the sum of its structures--as the seat of our humanity. Among the featured topics:

A potent re-examination of a major thinker and of controversies that still surround a young discipline, Karl Jaspers’ Philosophy and Psychopathology  is scintillating reading for professors and students in phenomenological philosophy, existential philosophy, psychopathology, psychiatry, psychotherapy, and psychology in general.

PROF. DR. DR. THOMAS FUCHS is the Karl Jaspers Professor of Philosophy and Psychiatry at the University of Heidelberg. He is the head of the research unit “Phenomenological Psychopathol-ogy and Psychotherapy”, coordinator of the EU Marie Curie Research Training Network TESIS (Towards an Embodied Theory of Intersubjectivity) and the Volkswagen Foundation Research Project “The Brain as a Mediating Organ”, as well as co-director of the Interdisciplinary Forum for Biomedicine and Cultural Studies (IFBK). His publications include: Mechanization of the Heart (Rochester University Press, 2001), The Embodied Self (Schattauer, 2010) and Ecology of the Brain (Oxford University Press, under contract).

DR. THIEMO BREYER is a postdoctoral researcher in philosophy and cognitive science at the Clinic for General Psychiatry, University of Heidelberg, lecturer at the University of Freiburg and research associate at the Husserl Archive Freiburg. He is the head of the research unit “Anthro-pology of Intersubjectivity”, funded by the Baden-Württemberg Foundation. His publications in-clude: On the Topology of Cultural Memory (Königshausen & Neumann, 2007), Attentionalität und Intentionalität (Fink, 2011) and Synchrony and Embodied Interaction (Springer, under con-tract).

PROF. DR. EM. CHRISTOPH MUNDT is professor emeritus of psychiatry at the University of Heidel-berg, where he held a chair in psychiatry and was clinical director of the Department of General Psychiatry and the polyclinic. His publications include: Interpersonal Factors in the Origin and Course of Affective Disorders (Gaskell, 1996), Psychotherapie in der Psychiatrie (Springer, 1997) and Konzeptuelle Weiterentwicklungen im Umkreis der strukturdynamischen Psychopa-thologie (Thieme, 2004).