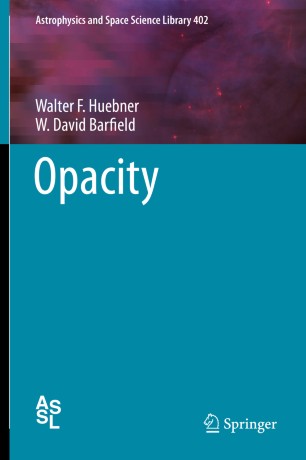 The interaction of radiation with matter is a fundamental process in the universe; in particular, the absorption and scattering of radiation by matter (the opacity) govern the formation, evolution, and structure of stars and planets.  But opacity is also important in many terrestrial applications in which radiation is the dominant means of energy transfer, such as controlled nuclear-fusion, laser ablation, atmospheric entry and reentry, and the "greenhouse" effect.  This book covers all aspects of opacity and equations of state for plasmas, gases, vapors, and dust and emphasizes the continuous transformation of phases and molecular compositions with changing density and temperature under conditions of local thermodynamic equilibrium (LTE) while preserving the basic abundances of the chemical elements in a mixture.

“The authors approach their subject in a comprehensive and thorough manner. … It is a ‘must buy’ for any library concerned with atomic and molecular physics and astronomy theory, and a highly-recommended textbook for all students concerned with radiative processes.” (Simon Jeffery, The Observatory, Vol. 135 (1245), April, 2015)