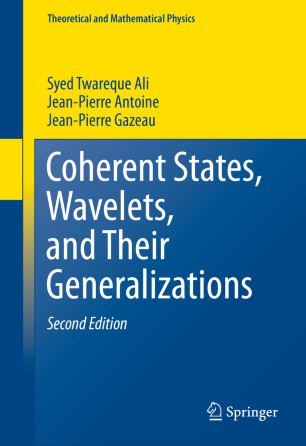 Coherent States, Wavelets, and Their Generalizations

Intended as an introduction to current research for graduate students and others entering the field, the mathematical discussion is self-contained. With its extensive references to the research literature, the first edition of the book is already a proven compendium for physicists and mathematicians active in the field, and with full coverage of the latest theory and results the revised second edition is even more valuable.

Dr. S. T. Ali is a full professor in the Department of Mathematics and Statistics, Concordia University, Montreal. He has held teaching and research positions at the Abdus Salam International Centre for Theoretical Physics (Trieste, Italy); the Department of Mathematics (University of Toronto, Canada); the Institut fur Theoretische Physike (Technische Universitat Clausthal, Germany); He has written about 150 research publications, including 3 books.

JP. Antoine has a full career as a professor of mathematical physics at Universite Catholique de Louvain, Belgium, after postdocs at Princeton University, University of Pittsburgh, and University de Geneve. He was also invited professor at many foreign universities (Universite Paris 7, Universite Burundi, Fukuoka University (Japan), Concordia University, Universite Nationale du Benin). He is now professor emeritus, but continues his research activities. At the Universite Catholique de Louvain, he was head of the Institute of Theoretical and Mathematical Physics (FYMA), Chairman of the Department of Physics, and member of the European Physical Society, the American Physical Society, the International Association of Mathematical Physics, the American Mathematical Society. He is a referee for a dozen of international journals of physics, mathematical physics, and signal processing. His research interests cover a wide range. From mathematical physics, in particular, the formulation of quantum mechanics beyond Hilbert space, he moved to several innovative topics in pure mathematics, such as partial inner product spaces and partial algebras of unbounded operators, a framework in which he is still working actively. On the other hand, he also pursued several research directions in mathematical physics, namely, classical gauge field theories, coherent states and wavelets, including the applications of the latter in signal and image processing. He is the author or co-author of more than 120 research papers, four monographs and plenty of book chapters or conference papers.

J-P. Gazeau is a full professor of Physics at the University Paris Diderot (Sorbonne Paris Cite), France, a member of the "Astroparticles and Cosmology" Laboratory (CNRS, UMR 7164), and currently Chairman of the Standing Committee of the International Colloquium on Group Theoretical Methods in Physics. Having obtained his academic degrees from Sorbonne University and Pierre-and Marie Curie University (Paris 6), he spent most of his academic career in Paris and as invited professor and researcher, in many other places, among them UCLA, Louvain, Montreal, Prague, Newcastle, Krakow, Rio de Janeiro and Sao Paulo. Professor Gazeau has authored more than 160 scientific publications, including 2 books, in theoretical and Mathematical Physics, mostly devoted to group theoretical methods in physics, coherent states, quantization methods, and number theory for aperiodic systems.