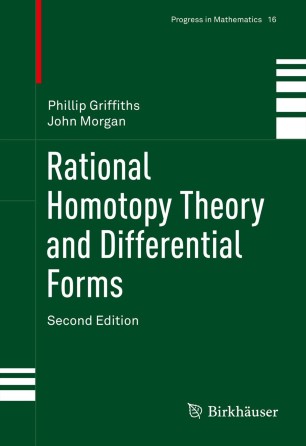 Part of the Progress in Mathematics book series (PM, volume 16)

“Rational homotopy theory is today one of the major trends in algebraic topology. Despite the great progress made in only a few years, a textbook properly devoted to this subject still was lacking until now… The appearance of the text in book form is highly welcome, since it will satisfy the need of many interested people. Moreover, it contains an approach and point of view that do not appear explicitly in the current literature.”

“The monograph is intended as an introduction to the theory of minimal models. Anyone who wishes to learn about the theory will find this book a very helpful and enlightening one. There are plenty of examples, illustrations, diagrams and exercises. The material is developed with patience and clarity. Efforts are made to avoid generalities and technicalities that may distract the reader or obscure the main theme. The theory and its power are elegantly presented. This is an excellent monograph.”

—Bulletin of the American Mathematical Society (Review of First Edition)

This completely revised and corrected version of the well-known Florence notes circulated by the authors together with E. Friedlander examines basic topology, emphasizing homotopy theory. Included is a discussion of Postnikov towers and rational homotopy theory. This is then followed by an in-depth look at differential forms and de Tham’s theorem on simplical complexes. In addition, Sullivan’s results on computing the rational homotopy type from forms is presented.

New to the Second Edition:

*Fully-revised appendices including an expanded discussion of the Hirsch lemma

*Presentation of a natural proof of a Serre spectral sequence result

*Updated content throughout the book, reflecting advances in the area of homotopy theory

With its modern approach and timely revisions, this second edition of Rational Homotopy Theory and Differential Forms will be a valuable resource for graduate students and researchers in algebraic topology, differential forms, and homotopy theory.