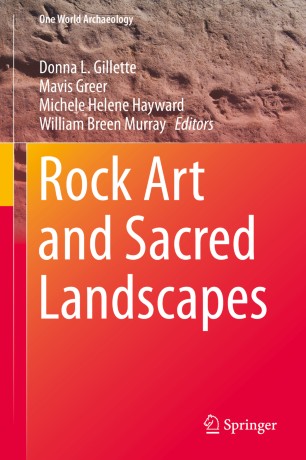 Part of the One World Archaeology book series (WORLDARCH, volume 8)

Social and behavioral scientists study religion or spirituality in various ways and have defined and approached the subject from different perspectives. In cultural anthropology and archaeology the understanding of what constitutes religion involves beliefs, oral traditions, practices and rituals, as well as the related material culture including artifacts, landscapes, structural features and visual representations like rock art. Researchers work to understand religious thoughts and actions that prompted their creation distinct from those created for economic, political, or social purposes. Rock art landscapes convey knowledge about sacred and spiritual ecology from generation to generation.

Contributors to this global view detail how rock art can be employed to address issues regarding past dynamic interplays of religions and spiritual elements. Studies from a number of different cultural areas and time periods explore how rock art engages the emotions, materializes thoughts and actions, and reflects religious organization as it intersects with sociopolitical cultural systems.

Mavis Greer Has a Ph.D. from University of Missouri, Columbia. She is co-owner of Greer Services, Archeological Consulting, Casper, Wyoming. Her interests include rock art and ethnohistory of the Northern Plains of North America, tipi ring analysis and cultural resource management.

William Breen Murray Has a Ph.D. from McGill University in Montreal, Canada. From 1976 – 2006 he was a Professor in the Departamento de Ciencias Sociales, Universidad de Monterrey, Mexico. His research focus is archaeoastronomy, hunter-gatherer adaptation and numerical representation.

Michele Hayward Has a Ph.D. from Pennsylvania State University and is currently a senior archaeologist with Panamerican Consultants, Inc. She has been involved with a variety of archaeological projects in the United States and the Caribbean. Her interest in Caribbean rock art began as an archaeologist at the Institute of Puerto Rican Culture and has grown to include documentation of rock art sites, as well as organizing and participating in national and international sessions on Caribbean rock art. She co-edited Rock Art of the Caribbean (2009).

“The papers did a solid job of addressing this broad topic from a range of perspectives. By focusing exclusively on rock art's relationship with various aspects of religion, ritual and spirituality from the deep past into the present, the contributors add another important layer to the ongoing archaeological and anthropological discourse surrounding the nature of the relationship between rock art and landscape.” (Liam M. Brady, South African Archaeological Bulletin, Vol. 70 (201), 2015)
Buy options