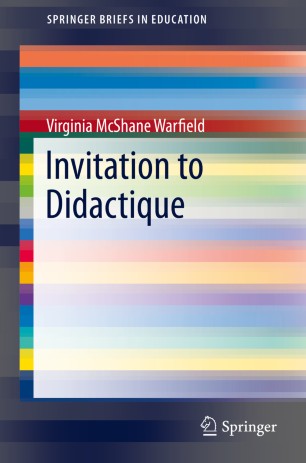 Part of the SpringerBriefs in Education book series (BRIEFSEDUCAT, volume 30)

Didactique is a research program in mathematics education that was launched in France in the 60's and now engages many researchers, from graduate students to senior professors. Until the 90's, almost none of its ideas and results were available to Anglophones. Since that time, a book and some articles have been published in English, but they tend to be accessible only to those who already have some expertise in mathematics education. This book is designed for the interested non-expert, or, alternatively, the expert who would like to hit the high spots of Didactique swiftly. It is designed to pique the interest of both sufficiently to entice them into digging further.

Virginia Warfield received her doctorate from Brown University in 1971 under the direction of Wendell Fleming and continued to contribute to the field of stochastic analysis for several years. At the same time she became increasingly absorbed by problems of mathematics education through her work with Project SEED, a highly regarded mathematics program whose goal was to promote sense-making mathematical activities for fourth through sixth grade students. She was instrumental in creating Washington Teachers of Teachers of Mathematics (WAToToM), at which members of departments of mathematics and mathematics education from around the State get together for a week-end of conversation and idea-sharing. During the past ten years she has played a leading role in three major NSF-funded teacher enhancement projects: Creating a Community of Mathematics Learners, Extending the Community of Mathematics Learners, and Graduate Teaching Fellows in K–12 Education (GK–12), all of which partner University of Washington faculty and graduate students with in-service teachers of mathematics. Warfield is described as a master in integrating various levels of math learners—creating relationships between grade school teachers and mathematicians—and as having special concern for students from economically disadvantaged backgrounds and underrepresented groups. Among her many professional activities, Warfield has been a member of the National Faculty (by election), of Sigma Xi, of the Association pour Recherche en Didactiques des Mathématiques, and of the Mathematical Association of America’s committees on Professional Development and Mathematical Education of Teachers. For the Association for Women in Mathematics she has served in several capacities: Chair of the Education Committee, Member of the Association Review Group for the revision of the NCTM Standards, Member-at-large of the Executive Committee, and Education Column Editor for the AWM Newsletter.