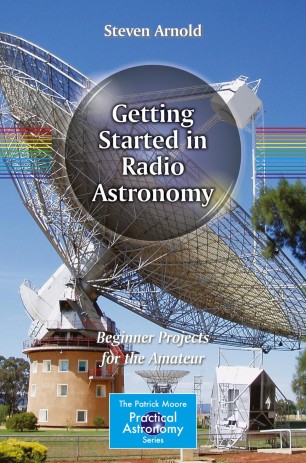 Getting Started in Radio Astronomy

Beginner Projects for the Amateur

Radio astronomy is a mystery to the majority of amateur astronomers, yet it is the best subject to turn to when desirous of an expanded knowledge of the sky. This guide intends to instruct complete newcomers to radio astronomy, and provides help for the first steps on the road towards the study of this fascinating subject.

In addition to a history of the science behind the pursuit, directions are included for four easy-to-build projects, based around long-term NASA and Stanford Solar Center projects. The first three projects constitute self-contained units available as kits, so there is no need to hunt around for parts. The fourth – more advanced – project encourages readers to do their own research and track down items.

Getting Started in Radio Astronomy provides an overall introduction to listening in on the radio spectrum. With details of equipment that really works, a list of suppliers, lists of online help forums, and written by someone who has actually built and operated the tools described, this book contains everything the newcomer to radio astronomy needs to get going.

Steve Arnold is a certified mechanical engineer and long-time amateur radio astronomer. He is a member of the Society for Popular Astronomy and has recently contributed radio astronomy articles about the NASA Radio Jove receiver kit and also wrote about the Stratospheric Observatory for Infrared Astronomy (SOFIA). He wrote and recorded a podcast about the NASA Radio Jove project, which can be heard on www.365daysofastronomy.org. Steve is a member of a number of astronomical groups and organizations. He has his own small permanent observatory and specializes in solar system deep-sky imaging, spectroscopy, and radio astronomy.