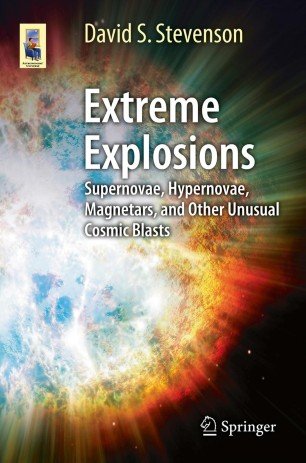 What happens at the end of the life of massive stars? At one time we thought all these stars followed similar evolutionary paths. However, new discoveries have shown that things are not quite that simple.

This book focuses on the extreme –the most intense, brilliant and peculiar– of astronomical explosions. It features highly significant observational finds that push the frontiers of astronomy and astrophysics, particularly as before these objects were only predicted in theory.

This book is for those who want the latest information and ideas about the most dramatic and unusual explosions detected by current supernova searches. It examines and explains cataclysmic and unusual events in stellar astrophysics and presents them in a non-mathematical but highly detailed way that non-professionals can understand and enjoy.

David Stevenson studied molecular biology at Glasgow and Cambridge Universities. He has a BSc Honours 1st Class Glasgow University; a Ph.D. in Molecular Genetics from Cambridge University; Open University – Astronomy and Planetary Sciences (distinction), and Open University, Geophysics and Geochemistry. His peer-reviewed biological research articles from 1999 to 2003 include a paper on the early development of life, “The Origin of Translation,” published in the Journal of Theoretical Biology.

David’s interest in astronomy was encouraged from an early age by his father. This (combined with an interest in explosions!) has led David to research and write about the life and death of stars.

After a stint in academia David became a teacher but continued to write science articles for various publications. He has published numerous articles on the Blackwell Plant Sciences website (2002-2007). “Turning Out the Lights” (an article about red dwarfs) was published in Popular Astronomy in 2003, “A Bigger Bang” (about Type Ia supernovae) in Sky & Telescope in July 2007, with "Supercharged Supernovae" featuring as the cover story for the October 2011 edition of Sky & Telescope. He has also published another book for Springer called Under a Crimson Sun, on the possibilities of life in red dwarf systems.

David lives in Nottingham in the UK with his wife and family.

“Stevenson … has authored a book on the deaths of stars that is unlike any other work on the subject. In a clear but very detailed manner, he discusses stellar evolution, placing particular emphasis on the many diverse and unusual ways that stars die. … Budding astrophysicists and professionals will find it educational and very thought provoking. … Summing Up: Highly recommended. All academic, general, and professional library collections.” (A. Spero, Choice, Vol. 51 (9), May, 2014)