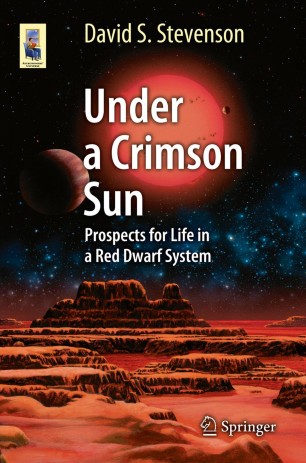 Under a Crimson Sun

Prospects for Life in a Red Dwarf System

Gliese 581 is a red dwarf star some 20.3 light years from Earth. Red dwarfs are among the most numerous stars in the galaxy, and they sport diverse planetary systems. At magnitude 10, Gliese 581 is visible to amateur observers but does not stand out. So what makes this star so important? It is that professional observers have confirmed that it has at least four planets orbiting it, and in 2009, Planet d was described in the letters of The Astrophysical Journal as “the first confirmed exoplanet that could support Earth-like life.”

Under a Crimson Sun looks at the nature of red dwarf systems such as Gliese as potential homes for life.

Realistically, what are prospects for life on these distant worlds? Could life evolve and survive there? How do these planetary surfaces and geology evolve? How would life on a red dwarf planet differ from life on Earth? And what are the implications for finding further habitable worlds in our galaxy?

Stevenson provides readers with insight into the habitability of planets and how this changes as time progresses and the central star evolves. Explore with him in this engaging, fascinating book the possibilities for finding life, from bacteria to more complex and even intelligent organisms, on red dwarf system planets.

David S. Stevenson studied molecular biology at Glasgow and Cambridge Universities. He has a BSc Honours 1st Class Glasgow University; a Ph.D. in Molecular Genetics from Cambridge University; Open University – Astronomy and Planetary Sciences (distinction), and Open University, Geophysics and Geochemistry. His peer-reviewed biological research articles from 1999 to 2003 include a paper on the early development of life, “The Origin of Translation,” published in the Journal of Theoretical Biology.

David’s interest in astronomy was encouraged from an early age by his father. This (combined with an interest in explosions!) has led David to research and write about the life and death of stars.

After a stint in academia David became a teacher but continued to write science articles for various publications. He has published numerous articles on the Blackwell Plant Sciences website (2002-2007). “Turning Out the Lights” (an article about red dwarfs) was published in Popular Astronomy in 2003, “A Bigger Bang” (about Type Ia Supernovae) in Sky & Telescope last July, with “Exceptional Explosions” (also for Sky & Telescope) currently in production. He is currently writing another book for Springer on what he terms “ultranovas,” which are a type of supernova.

David lives in Nottingham in the UK with his wife and family.

“It is a thought-provoking book, that provides information about modern research into exoplanets and super-Earths in particular, as well as entertaining science-writing, making this book an excellent choice for some additional reading for students and also showing how life might be totally different somewhere else and not similar at all to what we know here on Earth.” (Kadri Tinn, AstroMadness.com, August, 2014)