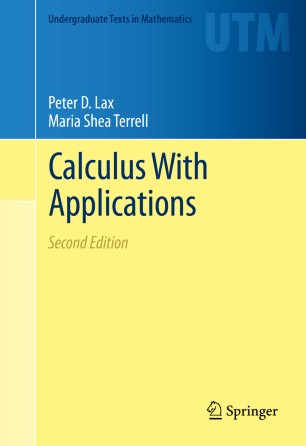 This new edition of Lax, Burstein, and Lax's Calculus with Applications and Computing offers meaningful explanations of the important theorems of single variable calculus. Written with students in mathematics, the physical sciences, and engineering in mind, and revised with their help, it shows that the themes of calculation, approximation, and modeling are central to mathematics and the main ideas of single variable calculus. This edition brings the innovation of the first edition to a new generation of students. New sections in this book use simple, elementary examples to show that when applying calculus concepts to approximations of  functions, uniform convergence is more natural and easier to use than point-wise convergence. As in the original, this edition includes material that is essential for students in science and engineering, including an elementary introduction to complex numbers and complex-valued functions, applications of calculus to modeling vibrations and population dynamics, and an introduction to probability and information theory.

Peter D. Lax is currently an Emeritus Professor of Mathematics at the Courant Institute of Mathematical Sciences.

Maria Shea Terrell is currently a Senior Lecturer of Mathematics and Director of Teaching Assistant Programs at Cornell University.

“The book under review, a little over 500 pages co-authored with Maria Terrell, is a first-approximation to Lax’s dream come true: a ‘thorough revision’ of the 1976 Lax-Burstein-Lax. … This reviewer will attempt to use them as a pedagogical tool when teaching single-variable calculus or introductory analysis in the future. … It is filled with beautiful ideas that are elegantly explained and chock-full with problems that will enchant both the experienced teacher and the curious novice.” (Tushar Das, MAA Reviews, December, 2014)

“The text starts with introductory facts on real numbers, sequences and limits, followed by chapters aimed at differential and integral calculus. … The text is accompanied by a lot of worked examples, figures and applications. Together with detailed proofs of theorems this makes the text suitable also for self-study.” (Vladimír Janiš, zbMATH, 2014)
Buy options