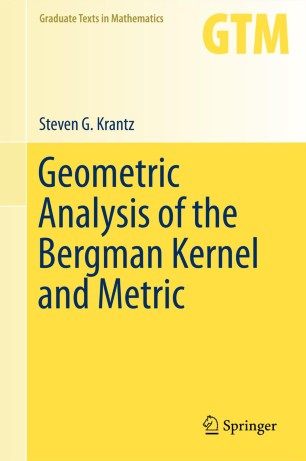 Geometric Analysis of the Bergman Kernel and Metric

This text provides a masterful and systematic treatment of all the basic analytic and geometric aspects of Bergman's classic theory of the kernel and its invariance properties. These include calculation, invariance properties, boundary asymptotics, and asymptotic expansion of the Bergman kernel and metric. Moreover, it presents a unique compendium of results with applications to function theory, geometry, partial differential equations, and interpretations in the language of functional analysis, with emphasis on the several complex variables context. Several of these topics appear here for the first time in book form. Each chapter includes illustrative examples and a collection of exercises which will be of interest to both graduate students and experienced mathematicians.

Steven G. Krantz is one of Springer’s and Birkhäuser’s most prolific and popular authors in the field of functional analysis, geometric analysis, and partial differential equations. Krantz is the series editor of Birkhäuser’s ‘ Cornerstones’ graduate text series and the founder and editor-in-chief of “The Journal of Geometric Analysis”, considered a society journal previously published by the AMS and often acts as an advisor to several senior editors at Springer/ Birkhäuser . He is also editor-in-chief of the “Journal of Mathematical Analysis and Applications”. Professor Krantz is currently the editor-in-chief of the AMS Notices and also edits for “The American Mathematical Monthly”, “Complex Analysis and Elliptical Equations”, and “The Bulletin of the American Mathematical Monthly”. Krantz is also known for his wide breadth of expertise in several areas of mathematics such as harmonica analysis, differential geometry, and Lie groups, to name a few. Notable awards include Chauvenet Prize (1992), Beckenbach Book Award (1994), Kemper Prize (1994), Outstanding Academic Book Award (1998), Washington University Faculty Mentor Award (2007).

“This book is a compendium on the current state of Bergman theory in several complex variables would be an excellent source for a graduate course on Bergman theory in several complex variables. It is a must have for graduate students in this area as well as mathematicians wanting to learn more about this theory. It begins with the basics and ends at the forefront of current research.” (Steven Deckelman, MAA Reviews, December, 2014)

“The monograph under review gives the reader a look at the ever-evolving Bergman theory. … The book covers a great deal of interesting topics on the Bergman kernel and metric. In particular, it abounds with useful and instructive calculation, much of which cannot be found elsewhere. It will certainly be an invaluable resource for students as well as seasoned researchers in geometric analysis of the Bergman kernel and metric.” (Jianbing Su, Mathematical Reviews, October, 2014)
Buy options