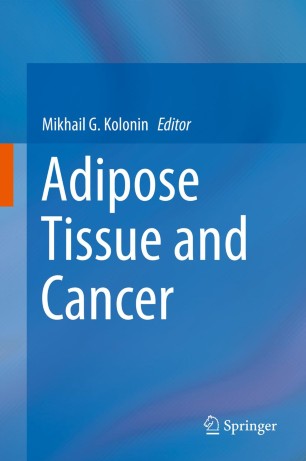 The pathophysiology underlying the relationship between obesity and cancer is complex and incompletely understood. Progression of certain cancers has been shown to accelerate in obese patients irrespective of their lifestyle and diet. Because obesity is manifested by overgrowth of white adipose tissue, it has been proposed that adipose tissue has a direct effect on cancer progression.

Adipose tissue is composed of several types of cells secreting numerous soluble factors collectively termed adipokines. In addition, infiltration of the immune system cells in obesity leads to increased production of a number of inflammatory factors by adipose tissue, thus contributing to the establishment of the metabolic syndrome. Endocrine signaling by adipose tissue-derived molecules has been shown to promote cancer in animal models, matching clinical associations. Recent studies have shown that cells from adipose tissue are capable of trafficking to tumors, thus enabling paracrine action of adipokines from within the tumor microenvironment. Increased tumor vascularization, immune system suppression and direct effects on malignant cell survival and proliferation have been investigated as mechanisms regulated by adipokines.

This volume will discuss clinical and experimental data pointing to the role of adipose tissue in cancer and to dissect individual mechanisms through which adipose tissue excess or restriction could influence cancer progression.