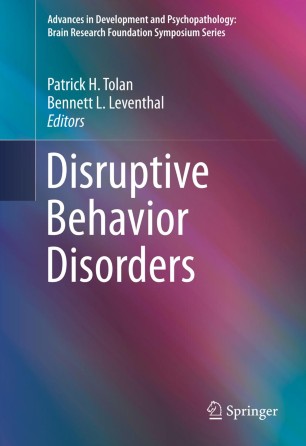 Aggressive behavior among children and adolescents has confounded parents and perplexed professionals—especially those tasked with its treatment and prevention—for countless years. As baffling as these behaviors are, however, recent advances in neuroscience focusing on brain development have helped to make increasing sense of their complexity.

Focusing on their most prevalent forms, Oppositional Defiant Disorder and Conduct Disorder, Disruptive Behavior Disorders advances the understanding of DBD on a number of significant fronts. Its neurodevelopmental emphasis within an ecological approach offers links between brain structure and function and critical environmental influences and the development of these specific disorders. The book's findings and theories help to differentiate DBD within the contexts of normal development, non-pathological misbehavior, and non-DBD forms of pathology. Throughout these chapters are myriad implications for accurate identification, effective intervention, and future cross-disciplinary study.

Patrick H. Tolan, PhD, is Professor of Education and of Psychiatry and Neurobehavioral Sciences at the University of Virginia where he is Director of Youth-Nex: The UVA Center to Promote Effective Youth Development. Youth-Nex is a cross-university, multidisciplinary center to advance prevention of problems affecting youth and to promote healthy development. Prior to starting this center in August 2009, Dr. Tolan directed the Institute for Juvenile Research at the University of Illinois for the prior 10 years, a multidisciplinary center of 50+ faculty focused on child and adolescent mental health, where he was Professor in the Department of Psychiatry and the School of Public Health. He is now Emeritus Professor at the University of Illinois.

For the past twenty-five years he has conducted research with multiple collaborators on an ecological-developmental understanding of youth with much of that work focused on high-risk communities and carried out through randomized trials. He also focuses on promoting use of empirically tested approaches to promote child and adolescent mental health.

Dr. Tolan is a fellow of 5 divisions of American Psychological Association, of the Society for Research in Aggression, and of the Society for Experimental Criminology. In 2007 he was awarded the Star of Science award from the Children’s Brain Research Foundation and in 2008 received a Presidential Citation from the American Psychological Association.

Bennett Leventhal, MD, is Deputy Director of the Nathan S. Kline Institute for Psychiatric Research. He is also Professor in the Department of Disability and Human Development at the University of Illinois, Chicago, Irving B. Harris Professor of Child and Adolescent Psychiatry, Emeritus at The University of Chicago and Professor of Psychiatry at Yonsei University, Seoul, South Korea.

Dr. Leventhal board certified in both General Psychiatry and Child and Adolescent Psychiatry, a Distinguished Life Fellow of the American Psychiatric Association and Distinguished Fellow of the American Academy of Child and Adolescent Psychiatry. Dr. Leventhal has an international reputation as a child and adolescent psychiatrist, recognized for his leadership and expertise in fostering scientific career development, training and broad-based collaborative research networks that span from molecular genetics to community service and public health. Dr. Leventhal’s research focuses on disruptions in brain development that interfere with social functioning, including the molecular genetics of autism and the prenatal origins of disruptive behavior disorders as well as pediatric psychopharmacology, bullying, epidemiology and treatment of autism.

Dr. Leventhal is the recipient of numerous awards, including the American Academy of Child and Adolescent Psychiatry George Tarjan Award, the Edithe J. Levitt Award for Distinguished Service from the National Board of Medical Examiners and the Star of Science Award from the Children’s Brain Research.