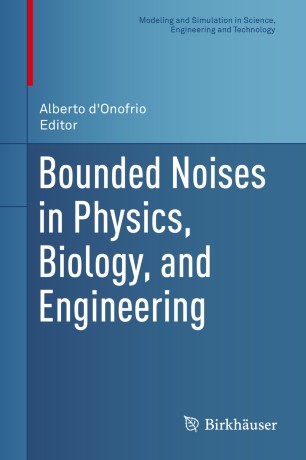 ​​Since the parameters in dynamical systems of biological interest are inherently positive and bounded, bounded noises are a natural way to model the realistic stochastic fluctuations of a biological system that are caused by its interaction with the external world. Bounded Noises in Physics, Biology, and Engineering is the first contributed volume devoted to the modeling of bounded noises in theoretical and applied statistical mechanics, quantitative biology, and mathematical physics. It gives an overview of the current state-of-the-art and is intended to stimulate further research.

Bounded Noises in Physics, Biology, and Engineering is intended for scientists working on stochastic processes with an interest in both fundamental issues and applications. It will appeal to a broad range of applied mathematicians, mathematical biologists, physicists, engineers, and researchers in other fields interested in complexity theory. It is accessible to anyone with a working knowledge of stochastic modeling, from advanced undergraduates to senior researchers.