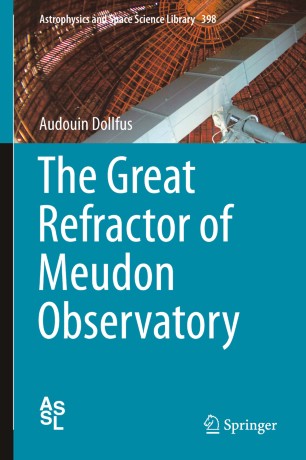 The Great Refractor of Meudon Observatory

The large telescope at Meudon, the Grande Lunette, with an 83 centimeter diameter, has become legendary.  When it was conceived (after 1870), Astronomy was limited to visual observation. Knowledge of the sky was limited to what one could see with the human eye, assisted only by optical means. The large telescopes produced at this time allowed for higher magnifications, permitting close-up views; the Meudon telescope was able to accomplish this perfectly.

At Meudon, which was to become a Mecca for visual observation, the major planets were examined in a way that no other telescope had previously been able to. The telescope monitored the state of their atmospheres and mapped the appearance of their surfaces.  Through the telescope, one could see the nuclei of comets, revealing their very small size, and by using a micrometer one could measure the separation of double stars and the diameters of asteroids.  With a marvelous little instrument, the polarimeter, the nature of clouds in planetary atmospheres could be determined and the type of surface material identified. The Grande Lunette has remained to this day the largest refracting telescope in Europe.

Audouin Dollfus (1924-2010), a world-renowned astronomer who spent his entire working life at the Meudon Observatory, describes the great years of the Meudon refractor.  He gives the entire story of this instrument, from the birth of the concept that drove Jules Janssen at the end of the nineteenth century, to the idea that French astronomy could provide an outstanding telescope which would approach the limits of the technical and industrial resources of that time.  Out of action since the 1990s, the year 2006 marked the first steps toward restoration and public reopening of the great instrument.

This English translation is by Richard McKim, a Past President of the British Astronomical Association who often worked both with Audouin Dollfus and the instrument which forms the subject of this book.