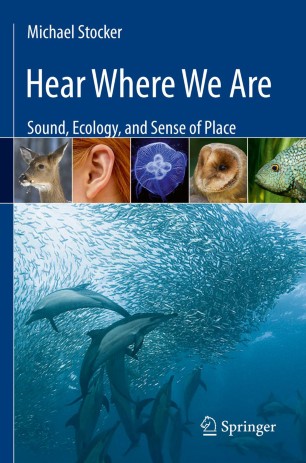 Hear Where We Are

Sound, Ecology, and Sense of Place

Throughout history, hearing and sound perception have been typically framed in the context of how sound conveys information and how that information influences the listener. Hear Where We Are inverts this premise and examines how humans and other hearing animals use sound to establish acoustical relationships with their surroundings.

This simple inversion reveals a panoply of possibilities by which we can re-evaluate how hearing animals use, produce, and perceive sound. Nuance in vocalizations become signals of enticement or boundary setting; silence becomes a field ripe in auditory possibilities; predator/prey relationships are infused with acoustic deception, and sounds that have been considered territorial cues become the fabric of cooperative acoustical communities. This inversion also expands the context of sound perception into a larger perspective that centers on biological adaptation within acoustic habitats. Here, the rapid synchronized flight patterns of flocking birds and the tight maneuvering of schooling fish becomes an acoustic engagement. Likewise, when stridulating crickets synchronize their summer evening chirrups, it has more to do with the ‘cricket community’ monitoring their collective boundaries rather than individual crickets establishing ‘personal’ territory or breeding fitness.

In Hear Where We Are the author continuously challenges many of the bio-acoustic orthodoxies, reframing the entire inquiry into sound perception and communication. By moving beyond our common assumptions, many of the mysteries of acoustical behavior become revealed, exposing a fresh and fertile panorama of acoustical experience and adaptation.

Praise for Hear Where We Are:

“Hear Where We Are is as poetic as it is informative - in the tradition of some of the best scientific writing."

“Hear Where We Are opens up an entirely new way of understanding not only sound perception but our place within the world… I no longer just hear my surroundings, rather I am now aware of how deeply sound shapes my relationship to the world around me...”

Michael Stocker is an acoustician, musician and naturalist who has been an active spokesperson about human generated ocean noise pollution 1992. He is a technical generalist with professional credentials in electronic design, communication systems, physics, and acoustics. He has worked with high profile projects and clients including Skywalker Ranch, the “cult” feature film Koyyanisqatsi, Monterrey Bay Aquarium, The US National Holocaust Museum, Electric Light Orchestra, Harry Nielson, and the premier bio-mimicry research firm Pax Scientific. He is also conversant in biology and mycology. His ability to convey complex scientific issues in clear terms to a non-scientific audience is one of his hallmarks and has proven instrumental in conveying the complex ideas of ocean bio-acoustics to a lay public as well as to policy makers. By way of this ability, he has written text on ocean noise policy that has been included in current and pending legislation at the state and federal level, including the California Ocean Action Plan, and Barbara Boxer's pending "National Ocean Protections Act."  In 2006 he won the prestigious "Heart of Marin" award for "Excellence in Non-profit Board Leadership."

“This is a readable and enjoyable book. … It is descriptive more than analytic and is a nice compilation of topics with which we in noise control engineering have less familiarity: human perception of sounds, soundscape studies, and psychological, physiological and animal acoustics. This book is highly recommended. It is a steal at the price.” (Richard J. Peppin, Noise Control Engineering Journal, Vol. 62 (5), September-October, 2014)

“This enchanting book … detail the importance of the sonic world and our myriad interactions with it. … The author delves into every aspect of human sound and then examines recent research, some speculative, on the sonic abilities of other species. … Summing Up: Recommended. All levels/libraries.” (T. J. Pinch, Choice, Vol. 51 (10), June, 2014)
Buy options