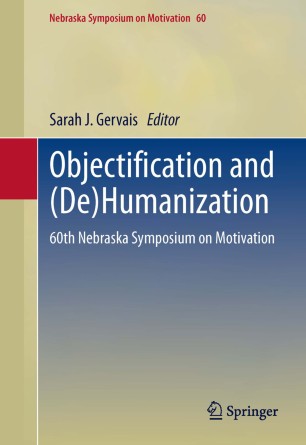 Objectification and (De)humanization brings together a wealth of scholarship from across psychology and the social sciences to illuminate how we understand "human-ness" and to focus on the many ways that those human qualities are minimized--and frequently denied--in others.

“They're all alike. I have no use for them. They're not like us-- they're barely human.”

These statements are easily recognized as different degrees of stereotyping, bigotry, and discrimination. But psychologically speaking, these inaccurate perceptions of people show other, deeper, forces at work: objectification, the reduction of people to specific parts or functions, and dehumanization, the treating of humans as animals or inanimate objects.

This forward-looking Volume in the Nebraska Symposium on Motivation offers research on dehumanization and objectification as experienced by both the targets and the initiators of these processes for clear insights into their effects on individual mental health and societal well-being. The theories in this book carry wider implications for action, from addressing various forms of pathology to advancing social justice. Included in the coverage:

Dr. Gervais has a dual Ph.D. in Psychology and Women's Studies from the Pennsylvania State University. Dr. Gervais' research examines power and subtle prejudice. Examining behaviors like the objectifying gaze, patronization, and interpersonal confrontation, Dr. Gervais has found that the discriminatory acts of powerful people are often more subtle and nuanced than previously thought, but they still have negative consequences for recipients. Dr. Gervais also examines the relationship between subtle prejudice, public policy, and law.