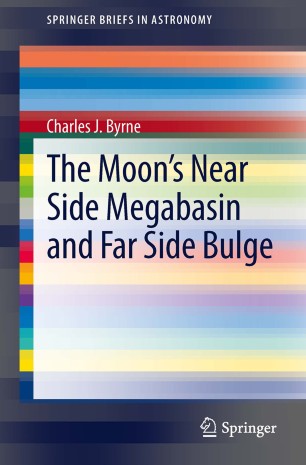 The Moon's Near Side Megabasin and Far Side Bulge

Since Luna and Lunar Orbiter photographed the far side of the Moon, the mysterious dichotomy between the face of the Moon as we see it from Earth and the side of the Moon that is hidden has puzzled lunar scientists. As we learned more from the Apollo sample return missions and later robotic satellites, the puzzle literally deepened, showing asymmetry of the crust and mantle, all the way to the core of the Moon. This book summarizes the author’s successful search for an ancient impact feature, the Near Side Megabasin of the Moon and the extensions to impact theory needed to find it. The implications of this ancient event are developed to answer many of the questions about the history of the Moon.

Charles J. Byrne’s interest in the Moon began when he was recruited from Bell Telephone Laboratories to work for the Apollo Project as a member of Bellcomm, the system engineering contractor to NASA headquarters (1962 – 1967). His responsibility was finding potential landing sites on the Moon that were both safe and scientifically interesting. A special responsibility was establishing requirements for the Lunar Orbiter and guiding its missions to support Apollo.

As an interest in the Moon arose in recent years, Byrne combined his experience with Lunar Orbiter with his career at Bell Telephone Laboratories in information theory and programming to enhance the archival photographs. This led to the publication of two books of lunar photographs, one on the near side of the Moon and one on the far side of the Moon. As that work matured, he became interested in the remarkable differences between these two aspects and commenced research activity to find the cause of the difference. The answer is the Near Side Megabasin, the subject of this book.