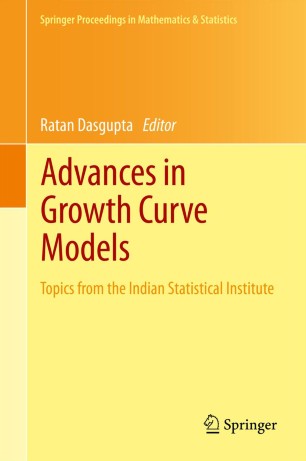 Topics from the Indian Statistical Institute

Advances in Growth Curve Models: Topics from the Indian Statistical Institute is developed from the Indian Statistical Institute's A National Conference on Growth Curve Models. This conference took place between March 28-30, 2012 in Giridih, Jharkhand, India. Jharkhand is a tribal area. Advances in Growth Curve Models: Topics from the Indian Statistical Institute shares  the work of researchers in growth models used in multiple fields.  A growth curve is an empirical model of the evolution of a quantity over time. Case studies and theoretical findings, important applications in everything from health care to population projection, form the basis of this volume. Growth curves in longitudinal studies are widely used in many disciplines including: Biology, Population studies, Economics, Biological Sciences, SQC, Sociology, Nano-biotechnology, and Fluid mechanics. Some included reports are research topics that have just been developed, whereas others present advances in existing literature. Both included tools and techniques will assist students and researchers in their future work. Also included is a discussion of future applications of growth curve models.