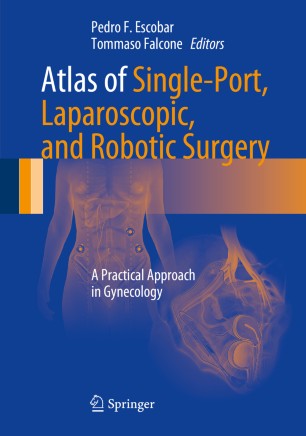 A Practical Approach in Gynecology

Minimally invasive surgery has become the standard treatment for many diseases and conditions. In the last decade, numerous studies have demonstrated that laparoscopic approaches have improved patients’ quality of life if compared with standard open procedures. Atlas of Single-Port, Laparoscopic, and Robotic Surgery serves as a guide in single-port, standard laparoscopy, and robotic surgery and shows how novel techniques, such as single-port laparoscopy and robotics, have recently evolved. The atlas illustrates the unique challenges that the new single-port surgery modality presents, including instruments crowding and articulation, and the advanced laparoscopic skills required to perform these procedures, such as the ability to move and control a flexible camera. It also illustrates how to efficiently and safely utilize the robot to perform most gynecologic procedures. This exceptional resource provides students, residents, fellows, operating room personnel, and practicing gynecologic surgeons with invaluable information about instrumentation, surgical technique, port systems, and the current research and development in robotics.

Pedro F. Escobar, MD, FACOG, FACS, is a Staff Physician in the Department of Obstetrics/Gynecology and Women's Institute at Cleveland Clinic. He is also an Assistant Professor of Surgery for the Cleveland Clinic Lerner College of Medicine of Case Western University in Cleveland, Ohio. Dr. Escobar specializes in the surgical and chemotherapy management of women with gynecologic cancers. His clinical interests include single port surgery and robotic surgery.

Tommaso Falcone, MD, FRCS(C), FACOG, is Professor of Surgery at Cleveland Clinic Lerner College of Medicine of Case Western Reserve University and Chairman of the Department of Obstetrics-Gynecology at Cleveland Clinic. He is certified by the American Board of Obstetrics and Gynecology in general obstetrics and gynecology, as well as reproductive endocrinology. He is also certified by the Royal College of Physicians and Surgeons of Canada. Dr. Falcone serves on the editorial board and is an ad hoc reviewer of more than 21 journals, most notably Fertility & Sterility and Obstetrics & Gynecology. He has been on the Board of Directors of several societies. Dr. Falcone is past president of the Society for Reproductive Surgeons and has served on review committees for NICHD and MRC. He is also an oral examiner for the American Board of Obstetrics & Gynecology.