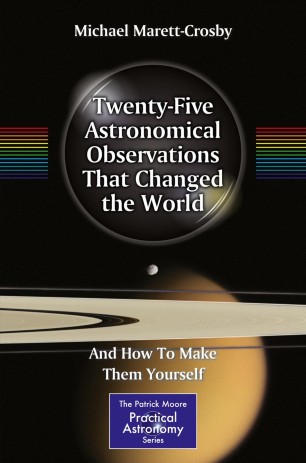 And How To Make Them Yourself

Human history is also the record of our fascination with the sky, and to look upwards is to follow in the steps of such greats as Galileo and Newton. What they and others once saw in the heavens for the first time, amateur astronomers can discover anew using this guide to twenty-five of the greatest journeys through space.

Starting with our most visible companion the Moon, each chapter offers a step-by-step walk-through of famous astronomical observations from the history of science. Beginning with the easiest targets, sometimes even accessible with the naked eye, the challenges become progressively more difficult. Beginner astronomers and more experienced hobbyists alike can reacquaint themselves with the wonders of our fellow planets and even reach far beyond our own solar system to touch on such incredible phenomena as the birth of new stars in nebula systems and the deceptive nothingness of black holes. The would-be astronaut can spy the International Space Station in orbit with binoculars or the doomsday prophet can search for new comets. Along the way, easily digestible mini-lessons inform the reader on the initial discovery of then-new celestial bodies and subsequent advances in our understanding of the cosmos.

Relying only on binoculars or small astronomical telescopes for most of the observations, and including background on the science of each phenomenon, this exploration of the skies is easy to follow and packed with useful information and fun tidbits. These practical observations put us in contact with all the history and culture surrounding them: through scientific speculation and literature to those first fuzzy images made in 1959 by the Russian space probe Luna 3.

Dr. Marett-Crosby obtained both an MA and PhD from the university of Oxford. After working as a pastoral counselor in academia and in the UK prison service (as a counselor and educator), he became, in 2005, a full-time writer working from his home on the channel island of Jersey. His published books include The Conversion of England (Abbey Press 1998);  the majority of Doing Business with Benedict (Continuum 2002). His most recent project is a novel, Two Thirds Man, which is currently with agents. Parts of this novel have already won national short story prizes. He speaks and writes on astronomical subjects, and believes practical astronomy is important in building bridges between science and the liberal arts.

A lifelong student of astronomy, he has been an enthusiastic amateur astronomer for most of his life, and is fortunate to be able to view the night sky from the enviable viewpoint of the UK’s southernmost outpost.

“This book shows how not everything has been so throughout the history of astronomy, and how observations of some objects and details on them have changed the way that humankind views the Universe or their place in it. … I found that it is an excellent book … . I think it's a better first books for observations than any big atlas or guide to specific types of objects. Perfect book to accompany a first telescope.” (AstroMadness.com, December, 2016)

“This book may provide an incentive for some undergraduate students and general readers to observe objects that they might not otherwise consider. Marett-Crosby, an amateur astronomer in the UK, places many of the historical observations in context. … useful for novice astronomical observers. Summing Up: Recommended. … Lower-division undergraduates and general readers.” (J. R. Kraus, Choice, Vol. 51 (7), March, 2014)
Buy options