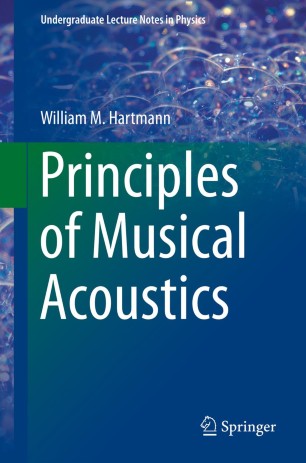 Principles of Musical Acoustics focuses on the basic principles in the science and technology of music. Musical examples and specific musical instruments demonstrate the principles. The book begins with a study of vibrations and waves, in that order. These topics constitute the basic physical properties of sound, one of two pillars supporting the science of musical acoustics. The second pillar is the human element, the physiological and psychological aspects of acoustical science. The perceptual topics include loudness, pitch, tone color, and localization of sound. With these two pillars in place, it is possible to go in a variety of directions. The book treats in turn, the topics of room acoustics, audio both analog and digital, broadcasting, and speech. It ends with chapters on the traditional musical instruments, organized by family.

The mathematical level of this book assumes that the reader is familiar with elementary algebra. Trigonometric functions, logarithms and powers also appear in the book, but computational techniques are included as these concepts are introduced, and there is further technical help in appendices.

Prof. William Hartmann is Professor of Physics at Michigan State University.  His research focuses on psychoacoustics and sound perception, and he first taught his course on musical acoustics for undergraduates in 1974.

In 1981-82 Dr. Hartmann took a leave of absence to work as a visiting scientist at the Institute for Research on Acoustics and Music (IRCAM) in Paris. He subsequently served at IRCAM as acting director of acoustics (1982-1983) and, supported by a NSF-CNRS grant, as consultant (1983-1987).

Dr. Hartmann has been a fellow of the Acoustical Society of America since 1983. He was chairman of the Technical Committee on Musical Acoustics from 1980 to 1984. From 1992-1995 he served on the Society's Executive Council and was chairman of the External Affairs Administrative Council (1994-1995). He gave the Society Tutorial at the spring meeting in 1996 entitled, "Pitch, Periodicity and the Brain." He served as vice president of the Society (1998-1999) and as president (2001-2002). As president, he worked to enhance the Society's connections with allied organizations such as the Institute for Noise Control Engineering, and to expand the Society's presence internationally.

In 2001 Dr. Hartmann received the Distinguished Faculty Award from Michigan State University and the Helmholtz-Rayleigh Silver Medal from the Acoustical Society of America.  He currently serves as Editor-in-Chief of Springer's Modern Acoustics and Signal Processing Series.

“Principles of Musical Acoustics is a welcome addition to the existing selection of undergraduate texts. … the writing is clear and lively, and it would be accessible to its target audience. Coupled with a laboratory component and ample demonstrations and computer visualizations, it could form the basis for a stimulating semester course.” (John Smedley, Physics Today, September, 2014)
Buy options