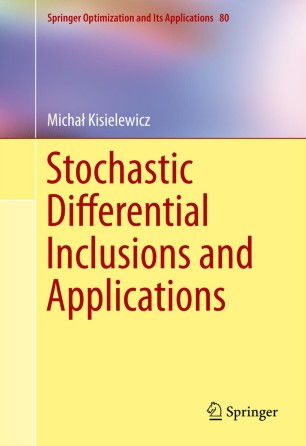 Part of the Springer Optimization and Its Applications book series (SOIA, volume 80)

Stochastic Differential Inclusions and Applications further develops the theory of stochastic functional inclusions and their applications. This self-contained volume is designed to systematically introduce the reader from the very beginning to new methods of the stochastic optimal control theory. The exposition contains detailed proofs and uses new and original methods to characterize the properties of stochastic functional inclusions that, up to the present time, have only been published recently by the author. The text presents recent and pressing issues in stochastic processes, control, differential games, and optimization that can be applied to finance, manufacturing, queueing networks, and climate control.

The work is divided into seven chapters, with the first two, containing selected introductory material dealing with point- and set-valued stochastic processes. The final two chapters are devoted to applications and optimal control problems.

Written by an award-winning author in the field of stochastic differential inclusions and their application to control theory, this book is intended for students and researchers in mathematics and applications, particularly those studying optimal control theory. It is also highly relevant for students of economics and engineering. The book can also be used as a reference on stochastic differential inclusions. Knowledge of select topics in analysis and probability theory are required.

Michał Kisielewicz is the author of over 70 articles on subjects including ordinary differential equations, systems theory, calculus of variations and optimal control, and probability theory and stochastic processes. He is a professor of mathematics at the University of Zielona Góra in Poland. In 2001, he was awarded the Order of Polonia Restituta, one of Poland's highest orders, for his achievements.