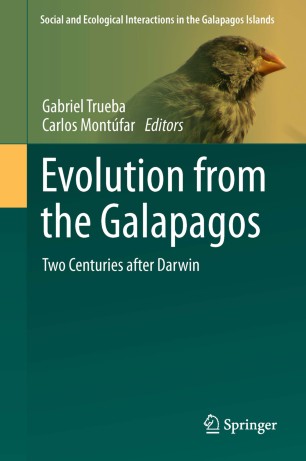 Evolution from the Galapagos

Part of the Social and Ecological Interactions in the Galapagos Islands book series (SESGI, volume 2)

In 2001 Lynn Margulis visited the main campus of the Universidad San Francisco de Quito to give the commencement address and to travel to the Tiputini Biodiversity Station in the Ecuadorian Amazonia.  We felt privileged to be part of her entourage for this trip to the rainforest and to have the opportunity to listen her descriptions of hundreds of plants, fungi, insects, slime molds, and even symbiotic protists inhabiting the guts of primitive termites.  During this trip Lynn expressed the need to promote a more comprehensive perspective on biological evolution, one that takes in account not only the classical and modern interpretations of Darwin’s ideas but also the mechanisms of microbial evolution, especially  symbiogenesis -the process that gave rise to eucaryotes  more than two billion years ago and has continued to shape protists and  multicellular organisms ever since.  It was clear that evolutionary science was concentrated primarily on macroscopic biota while neglecting microbes almost entirely.

Those conversations became the main motivation to bring some of the most important minds working in evolutionary science to the very place that inspired Charles Darwin, the Galapagos Islands. During  the summers of  2005 and  2009 we gathered scientists specializing on plants, animals, bacteria and, protists to discuss the peculiarities of evolutionary mechanisms within each domain of life. This book contains some of the most important lectures presented at the first two World Summits on Evolution.