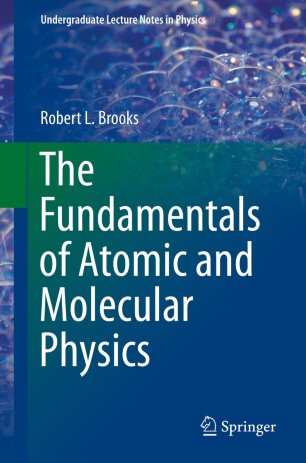 The Fundamentals of Atomic and Molecular Physics

The Fundamentals of Atomic and Molecular Physics is intended as an introduction to the field for advanced undergraduates who have taken quantum mechanics. Each chapter builds upon the previous, using the same tools and methods throughout. As the students progress through the book, their ability to use these tools will steadily increase, along with their confidence in their efficacy. The book treats the two-electron atom as the simplest example of the many-electron atom—as opposed to using techniques that are not applicable to many-electron atoms—so that it is unnecessary to develop additional equations when turning to multielectron atoms, such as carbon. External fields are treated using both perturbation theory and direct diagonalization and spontaneous emission is developed from first principles. Only diatomic molecules are considered with the hydrogen molecular ion and neutral molecule treated in some detail. This comprehensive coverage of the quantum mechanics of complex atoms and simple diatomic molecules, developed from the very basic components, is extremely useful for students considering graduate studies in any area of physics.

Robert L. Brooks is Professor Emeritus of Physics at the University of Guelph in Guelph, Ontario, Canada. He received his Ph.D. in Atomic Physics at the University of Alberta doing beam-foil spectroscopy and continued these studies at Argonne National Laboratory in the U.S. He took a Research Associate position at the University of Guelph in 1981, became a University Research Fellow in 1984, and full professor in 1995. He is best known for his spectroscopic studies of cryogenic hydrogen, deuterium and helium undergoing proton-beam irradiation. He has been a visiting scientist at Risr National Laboratory in Roskilde, Denmark at HASYLAB in Hamburg, Germany and at the Institute of Physics and Astronomy in Aarhus, Denmark. He has been chair of the Division of Atomic and Molecular Physics of the Canadian Association of Physicists, director of the Guelph-Waterloo Physics Institute and chair of the Guelph physics department. Professor Brooks has taught university physics from the first year to the graduate level and atomic and molecular physics to senior undergraduates for over 20 years.