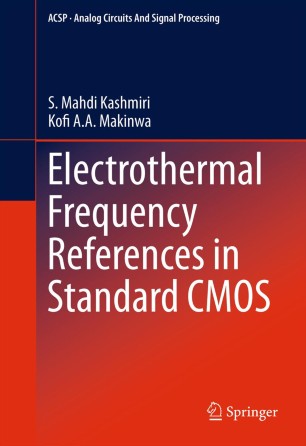 This book describes an alternative method of accurate on-chip frequency generation in standard CMOS IC processes. This method exploits the thermal-diffusivity of silicon, the rate at which heat diffuses through a silicon substrate.  This is the first book describing thermal-diffusivity-based frequency references, including the complete theoretical methodology supported by practical realizations that prove the feasibility of the method.  Coverage also includes several circuit and system-level solutions for the analog electronic circuit design challenges faced.

·         Examines the thermal properties of silicon as a solution for the challenge of on-chip accurate frequency generation;

·         Follows a top-down methodology in circuit design, in which system-level design is promoted by behavioral simulations.

Mahdi Kashmiri was born on March 21st, 1980 in Tehran, Iran. He received his B.Sc. degree in electrical engineering from Tehran University, Tehran, Iran, in 2001, and his M.Sc. degree in microelectronics (cum laude) from Delft University of Technology, Delft, The Netherlands in 2006. In April 2012, he received his PhD degree from the same university for his work on electrothermal frequency references in standard CMOS. From June 2001 to August 2004, he was a system design engineer at Parman Co. Tehran, Iran, where he worked on the development of a SDH fiber optics telecommunication system. From September 2005 to October 2006, he was an intern at the mixed-signal circuit and systems group of Philips Research Laboratories (currently NXP research), Eindhoven, The Netherlands, where he worked on a wide-band continuous-time sigma-delta modulator. Since October 2010 he has been with the precision systems group of Texas Instruments Incorporated, Delft, The Netherlands (formerly National Semiconductor Corporation). His research interests include the analog and mixed-signal integrated circuits, precision analog systems, and data converters.
Mr. Kashmiri received the 2009 Young Scientist Award of the European Solid-State Circuits Conference (ESSCIRC).

Kofi A. A. Makinwa (M’97–SM’05–F’11) received the B.Sc. and M.Sc. degrees from Obafemi Awolowo University, Nigeria in 1985 and 1988 respectively. In 1989, he received the M.E.E. degree from the Philips International Institute, The Netherlands and in 2004, the Ph.D. degree from Delft University of Technology, The Netherlands.
From 1989 to 1999, he was a Research Scientist with Philips Research Laboratories, Eindhoven, The Netherlands, where he worked on interactive displays and on front-ends for optical and magnetic recording systems. In 1999, he joined Delft University of Technology, where he is now an Antoni van Leuwenhoek Professor in the Faculty of Electrical Engineering, Computer Science and Mathematics. His main research interests are in the design of precision analog circuitry, sigma-delta modulators, smart sensors and sensor interfaces. This has resulted in 4 books, 18 patents and over 150 technical papers.
Kofi Makinwa is on the program committees of the European Solid-State Circuits Conference (ESSCIRC) and the Advances in Analog Circuit Design (AACD) workshop. He has also served on the program committee of the International Solid-State Circuits Conference (ISSCC), as a guest editor of the Journal of Solid-State Circuits (JSSC) and as a distinguished lecturer of the IEEE Solid-State Circuits Society (2008 to 2011). He is a co-recipient of several best paper awards: from the JSSC, ISSCC, Transducers and ESSCIRC, among others. In 2005, he received a Veni Award from the Netherlands Organization for Scientific Research and the Simon Stevin Gezel Award from the Dutch Technology Foundation. He is an alumnus of the Young Academy of the Royal Netherlands Academy of Arts and Sciences and an elected member of the IEEE Solid-State Circuits Society AdCom, the society's governing board.