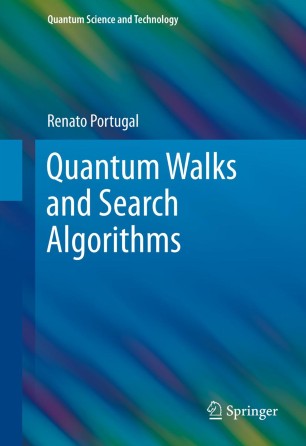 It is known that quantum computers have great power for searching unsorted databases. This power extends to many kinds of searches, particularly to the problem of finding a specific location in a spatial layout, which can be modeled by a graph. The goal is to find a specific node knowing that the particle uses the edges to jump from one node to the next.

This book is self-contained with main topics that include:

The reader will benefit from the pedagogical aspects of the book, learning faster and with more ease than would be possible from the primary research literature. Exercises and references further deepen the reader's understanding, and guidelines for the use of computer programs to simulate the evolution of quantum walks are also provided.

Dr. Renato Portugal is Researcher in the Department of Computer Science at the National Laboratory for Scientific Computing (LNCC). His past positions include Visiting Professor in the Department of Applied Mathematics and the Symbolic Computation Group at the University of Waterloo, Visiting Professor in the Department of Physics at Queen’s University of Kingston, and Researcher at the Brazilian Center for Research in Physics. He received his D.Sc. at the Centro Brasileiro de Pesquisas Fisicas, CBPF, Brazil. He has published 40 articles in Scientific Journals, 3 books, and over 30 papers in refereed proceedings. He has developed 7 software packages, including his latest: The Invar Package in 2007. He was General Chair of the Workshop-School of Quantum Information and Computation (WECIQ 2010), and Chair of the Programme Committee for the Workshop-School of Quantum Information and Computation (WECIQ 2006).

“The reviewed book is a pedagogically oriented survey of the main results regarding quantum walks and quantum search algorithms. … The book is nicely written, the concepts are introduced naturally, and many meaningful connections between them are highlighted. The author proposes a series of exercises that help the reader get some working experience with the presented concepts, facilitating a better understanding. Each chapter ends with a discussion of further references, pointing the reader to major results on the topics presented in the respective chapter.” (Florin Manea, zbMATH, Vol. 1275, 2014)
Buy options