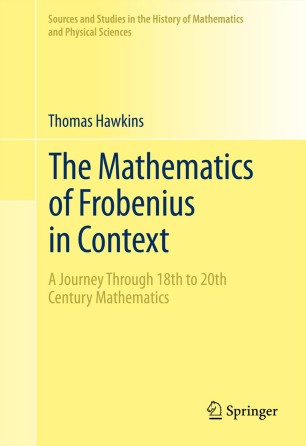 The Mathematics of Frobenius in Context

A Journey Through 18th to 20th Century Mathematics

Frobenius is best known as creator of the theory of group characters and representations, but his name is attached to a multitude of theorems and concepts from a broad spectrum of mathematical disciplines. In this book his mathematics is presented “in context” in two senses. The first provides the reader with the historical background necessary to understand why Frobenius undertook to solve a particular problem and to appreciate the magnitude of his achievement. Part of the context involves Frobenius’ training in the Berlin school of mathematics presided over by Weierstrass, Kronecker, and Kummer, from whom he learned disciplinary ideals as well as theorems. Frobenius’ mathematics is also presented “in context” in that the author traces the ways in which his work was subsequently applied, developed, and ultimately incorporated into present-day mathematics. As a consequence of the contextual approach, the reader will encounter a broad swath of diverse and important strands of 18th–20th century mathematics, ranging from the work of Lagrange and Laplace on stability of linear systems of differential equations to the theory of complex abelian varieties.

The book is divided into three parts. Part I provides an overview of Frobenius’ entire mathematical career and thus serves as an introduction to the main body of the book. Here, within the framework of his educational and professional career, his contributions to mathematics and the attendant backgrounds are briefly sketched and their subsequent impact upon the development of mathematics indicated. Part II presents the development of core aspects of linear algebra up to and including the work of Weierstrass and Kronecker. The chapters of Part III deal in depth with Frobenius’ major works and can be read independently of one another.

Thomas Hawkins was awarded the MAA Chauvenet Prize for expository writing and was the first recipient of the AMS Whiteman Prize for historical exposition. His last book was Emergence of the Theory of Lie Groups (Springer, 2000).