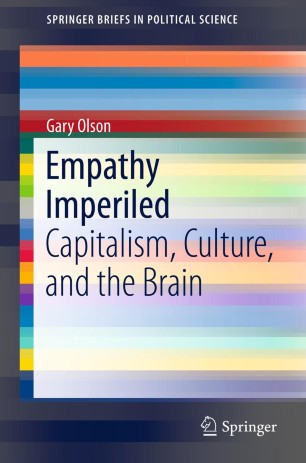 Capitalism, Culture, and the Brain

Empathy is putting oneself in another’s emotional and cognitive shoes and then acting appropriately.   The evolutionary process has given rise to a hard-wired neural system, described as “the most radical of human emotions, that equips us to connect with one another.  But this critical connection has been short-circuited by the dynamic convergence of culture, politics and the brain under the hegemonic influence of neoliberal capitalism. The book explores this process through sections on education, the neoliberal state, neuromarketing, corporations, militarization, mass culture, film, photo images and media.  How does the system blunt, bracket off and or otherwise channel empathy’s revolutionary potential?  What does this reveal about how the world works and especially, how it might work better? Empathy Imperiled offers a provocative, empirically grounded dissent from capitalism’s narrative about human nature. It offers a unique perspective on  our current political culture and process and as such it will appeal to students and scholars in political science, psychology, anthropology, and several related fields.