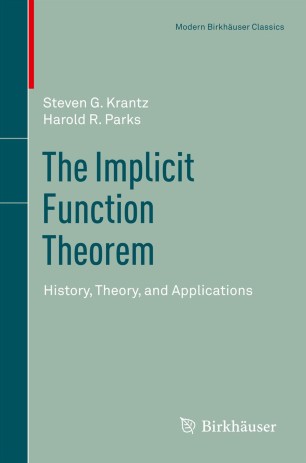 Originally published in 2002, The Implicit Function Theorem is an accessible and thorough treatment of implicit and inverse function theorems and their applications. It will be of interest to mathematicians, graduate/advanced undergraduate students, and to those who apply mathematics. The book unifies disparate ideas that have played an important role in modern mathematics. It serves to document and place in context a substantial body of mathematical ideas.

“The book under review balances the historical analyses with presentations and discussions of the proofs of some formulations of the implicit function theorem. … The authors have taken some care to make the book self-contained, and as such a well-motivated undergraduate student can profitably read many parts of it, and the whole book is within the reach of a first-year graduate student.” (Felipe Zaldivar, MAA Reviews, March, 2013)