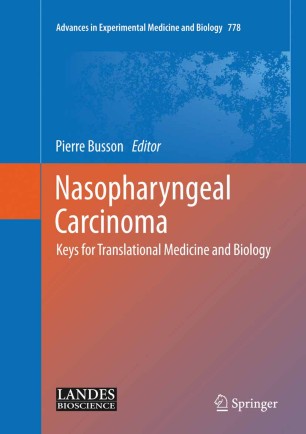 Keys for Translational Medicine and Biology

Part of the Advances in Experimental Medicine and Biology book series (AEMB, volume 778)

This volume intends to contribute to “translational medicine and biology”. By this, we mean a bi-directional process whose aim is to develop knowledge from basic science towards diagnostic and therapeutic applications and reciprocally to raise new questions for basic scientists. One general requirement for translational research is to establish a multidisciplinary knowledge base shared by the actors of various specialties. This is precisely the aim of the 12 chapters of this book. It will be useful for scientists, including PhD students, who want to become more familiar with the main concepts of NPC pathology, medical imaging and current therapeutics. Conversely, medical doctors who want to update their knowledge of NPC biology will benefit from chapters on viral and cellular oncogenesis and various aspects of host-tumor interactions.

Pierre Busson is a Senior Research Scientist at the CNRS (National Center for Scientific Research) and the Gustave Roussy Institute in Villejuif, close to Paris. He obtained his MD in 1983 and his PhD in Virology in 1990 from Paris University. Following a post-doctoral research fellowship at the Lineberger Cancer Research Center (Chapel Hill, North Carolina, USA), he was recruited by the CNRS in 1992 and established his own group in the Gustave Roussy Institute in 2001.

His major research interests are cellular interactions in Epstein-Barr virus-associated nasopharyngeal carcinomas, with special emphasis on the role of tumor exosomes and other secreted nano-objects, in a perspective of translational research. Recently, his group has extended the same type of approach to ovarian carcinomas. He published about 75 articles in peer-reviewed scientific journals.

Dr Pierre Busson has been member of the Board of the International Association for Epstein-Barr virus research from 2000 to 2004. He has been actively involved in the organization of bi-annual international meetings on nasopharyngeal carcinomas (2003, Villejuif; 2005, Toronto; 2007, Brisbane; 2009, Marrakech; 2011, Penang). He is a grant reviewer for several institutions in France, Europe and in Hong-Kong. He is academic editor for PLoS One and reviewer for about 20 journals.