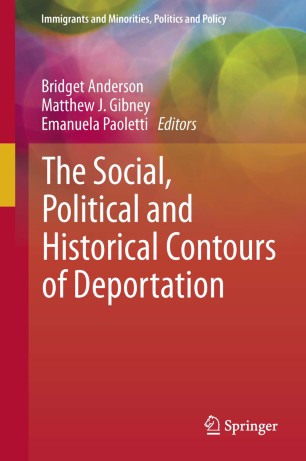 The Social, Political and Historical Contours of Deportation

Part of the Immigrants and Minorities, Politics and Policy book series (IMPP)

In recent years states across the world have boosted their legal and institutional capacity to deport noncitizens residing on their territory, including failed asylum seekers, “illegal” migrants, and convicted criminals. Scholars have analyzed this development primarily through the lens of immigration control. Deportation has been viewed as one amongst a range of measures designed to control entrance, distinguished primarily by the fact that it is exercised inside the territory of the state. But deportation also has broader social and political effects. It provides a powerful way through which the state reminds noncitizens that their presence in the polity is contingent upon acceptable behavior. Furthermore, in liberal democratic states immunity from deportation is one of the key privileges that citizens enjoy that distinguishes them from permanent residents. This book examines the historical, institutional and social dimensions of the relationship between deportation and citizenship in liberal democracies. Contributions also include analysis of the formal and informal functions of administrative immigration detention, and the role of the European Parliament in the area of irregular immigration and borders. The book also develops an analytical framework that identifies and critically appraises grassroots and sub national responses to migration policy in liberal democratic societies, and considers how groups form after deportation and the employment of citizenship in this particular context, making it of interest to scholars and international policy makers alike.

“It is commonly surmised that the increased flows of goods, ideas, finance and people are slowly leading to the dissolution of boundaries between nation-states. However, as the varied and excellent chapters in this collection demonstrate, the enforcement of state power through detention and deportation is still a real and growing feature of contemporary political life. Expulsion has always been a moral sanction (think of Adam and Eve being banished from the Garden of Eden or the ostracism directed against dissidents in ancient Athens, who were forced to leave for ten years). As the editors suggest, deportation remains a means of enforcing a normative order (‘a community of values’), while the authors and editors of this book have expanded the subject-matter to include the deportees’ perspectives and the effects of deportation on families, other potential victims and on those whose social inclusion has been affirmed by the exclusion of others. These studies will enrich and enlarge the study of the more naked forms of state power.” (Robin Cohen, Professor Emeritus of Development Studies, University of Oxford)

“This wide-ranging, well-researched, and highly informative work is a major contribution to the growing body of scholarship examining the harsh consequences of deportation around the world. The editors have gathered an impressive group of scholars who craft an eclectic view of how deportation has evolved, what it may signify, and how it now works in various settings. With its inclusion of historical, institutional, comparative, and finely-textured, sensitive experiential studies, this book offers an important--if frequently distressing--overview of phenomena that deserve our full attention.” (Daniel Kanstroom, Professor of Law and Director, International Human Rights Program, Boston College Law School)