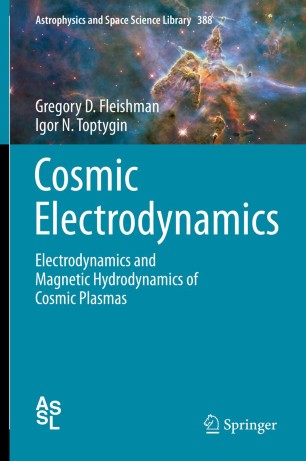 This volume offers a deep and detailed overview of plasma behavior in diverse astrophysical conditions. The presentation is based on a solid science foundation that includes well established physical laws of electromagnetism, hydrodynamics, classical and quantum mechanics and other relevant fields of science. Qualitative ideas and descriptions are followed by quantitative derivations and estimates of key physical quantities, and the results of theories and models are confronted with modern observational data obtained from numerous international science programs. Fundamental astrophysical phenomena, such as charged particle acceleration and magnetic field generation, are presented along with spectacular phenomena, such as stellar winds (including ultra-relativistic pulsar wind), supernova explosions and evolution of its remnants, and solar flares.

Gregory D. Fleishman is a Research Professor of Physics at the New Jersey Institute of Technology. He is connected to the Center for Solar-Terrestrial Research which operates the Big Bear Solar Observatory in California. He has published 65 research aticles in refereed journals. Igor N. Toptygin is professor at Saint-Petersburg State Polytechnical University in Russia. He has published 52 research papers in English-language refereed journals.

“The present textbook gives a deep and detailed overview of the plasma behavior under various astrophysical conditions where electromagnetic interactions play an essential role. … The textbook is intended for undergraduate and graduate students, but it may also be used as a reference book by active researchers in astrophysics, space physics, and geophysics.” (Claudia-Veronika Meister, zbMATH, Vol. 1269, 2013)
Buy options