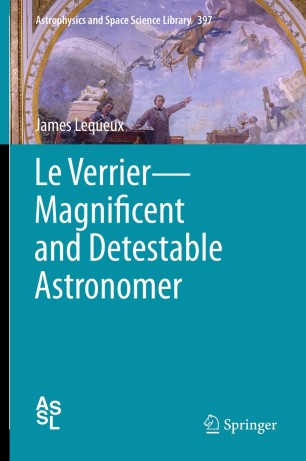 Le Verrier was a superb scientist. His discovery of Neptune in 1846 made him the most famous astronomer of his time. He produced a complete theory of the motions of the planets which served as a basis for planetary ephemeris for a full century. Doing this, he discovered an anomaly in the motion of Mercury which later became the first proof of General Relativity. He also founded European meteorology. However his arrogance and bad temper created many enemies, and he was even fired from his position of Director of the Paris Observatory.

James Lequeux completed his PhD thesis in radioastronomy in 1962 and was an assistant, then associate, professor of physics and astronomy at Paris University until 1966. He was an Astronomer from 1966-1999 and an invited scientist at CalTech from 1968-1969. Dr. Lequeux was also the Director of the Marseilles Observatory from 1983-1988 and was Editor-in-Chief of the journal Astronomy & Astrophysics for 15 years. He retired in 1999 and then began work on the history of astronomy, a subject he presently writes about. Dr. Lequeux has published over 403 papers and four books, including The Interstellar Medium (Springer 2005).

“The principals are illustrated together with many instruments, documents and buildings, as a standalone collection it would be very useful to any student of 19th century science. … the book comes directly from French archives, making this the definitive English language biography of Le Verrier. It makes an indispensable addition to our knowledge of astronomy of that turbulent era. … It must find a place in any Library dedicated to the history of science.” (Brian Sheen, F.A.S. Newsletter, Issue 105, Spring, 2014)

“This English version casts a fresh light on Le Verrier – the astronomer who discovered the planet Neptune ‘at the end of his pen’ in September 1846. … This book is very readable and presents a fascinating story of conflict and discovery. Bernard and Bill Sheehan deserve thanks for bringing it to an anglophone readership.” (David Sellers, Journal for the history of Astronomy, Vol. 45, February, 2014)

“Lequeux’s detailed account of the professional life of one of France’s best-known 19th-Century astronomers is a work of extensive scholarship, and fills admirably a curious void in the literature on world astronomers of renown. … The book is extremely well written … . The book is as thorough a study as can be conceived, and should be in every library as a testament to Paris’s struggles with both pollution and people during its formative years on the world astronomical stage.” (Elizabeth Griffin, The Observatory, Vol. 133 (1237), December, 2013)

“French astronomer/historian Lequeux delves deeply into the life and work of Urbain Le Verrier (1811-77), from his early studies and mathematical interests through the discovery that made him famous, the prediction of the position of an unknown planet (later named Neptune). … Footnotes provide references and scientific explanations. … The translation and editing are excellent. Summing Up: Highly recommended. History of astronomy collections, upper-division undergraduates and above.” (M.-K. Hemenway, Choice, Vol. 51 (3), November, 2013)