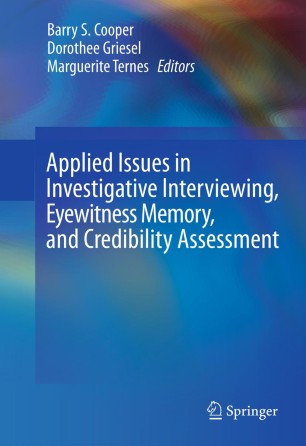 Victims. Witnesses. Suspects. Answers to an interviewer’s questions may mean the diﬀerence between prison or freedom, custody or loss, justice served or justice miscarried–outcomes that depend on expert decision-making as much as on the answers themselves.

Meticulously researched and reasoned by an international panel of experts from across the criminal justice ﬁelds, Applied Issues in Investigative Interviewing, Eyewitness Memory, and Credibility Assessment illustrates areas and strategies for improvement in this complex legal arena. The book begins by arguing for the need for ﬁeld research in studying eyewitness memory, and subsequent chapters bear this out ably in issues such as biopsychosocial phenomena of memory, why inconsistent testimony may not necessarily equal deceit, and the challenges and opportunities digital technology poses in evaluating truthfulness. Throughout, the book’s theories, critiques, models, and tools are informed not only by the behavioral sciences but by the real-world experience of law enforcement and judicial professionals. Among the topics covered:

• Errors made by investigative interviewers and suggestions for redress.

• Repeated interviews about repeated trauma from the distant past.

• The contextualization of words by expert lie detectors.

Dr. Barry S. Cooper is a Registered Psychologist in Vancouver, BC, Canada, practicing in the forensic arena. He received an MA and Ph.D. in Forensic Psychology at the University of British Columbia (UBC) where he met and was mentored by Dr. John Yuille. A former Senior Psychologist for the Correctional Service of Canada, Dr. Cooper is a Psychologist for the Forensic Psychiatric Services Commission at the BC Forensic Psychiatric Hospital. He is a Clinical Instructor in the Department of Psychiatry at UBC and an Adjunct Professor in the Departments of Psychology at UBC-Okanagan and Simon Fraser University. In addition, Dr. Cooper is in private practice which involves assessment and consultation services to law enforcement, lawyers, corrections, and the Judiciary. He also a founding Partner and Director of Research and Development for the Forensic Alliance, a research, training, and consulting company headed by Dr. Yuille. Dr. Cooper’s research and clinical-forensic interests include investigative interviewing, eyewitness memory, credibility/malingering assessment, risk assessment and psychopathy. He has provided training to various groups including law enforcement, child protection, mental health professionals, lawyers, corrections, and the judiciary. Dr. Cooper has also provided evidence at BC Review Board hearing and has served as an expert witness in court for both the prosecution and defence.

Dr. Dorothee Griesel belongs to the Gesellschaft für Wissenschaftliche Gerichts- und Rechtspsychologie (GWG) in Munich, Germany - a network of forensic psychologists and psychiatrists. As an expert witness, she provides credibility assessments in the context of criminal law, family law, and compensation claims. In this line of work, she benefits tremendously from her training with Dr. John Yuille. She was first introduced to his research on autobiographical memory for violent events during a practicum in the Forensic Psychology Lab at the University of British Columbia (UBC) in 2001. In 2002, she completed her Diplom in Psychology at Mannheim University in Germany and entered the Ph.D. program in Forensic Psychology at UBC under John’s supervision. She also received training in Counseling Psychology and completed a pre-doctoral internship at the Health and Counseling Centre at Simon Fraser University. Dr. Griesel’s dissertation was a field investigation of sex trade workers’ narratives of sexual violence. She completed her Ph.D. in 2008. In 2007, when John became a Professor Emeritus, she participated in organizing his Festschrift conference at UBC, which set the stage for the present book.

Dr. Marguerite Ternes has worked for the Correctional Service of Canada’s Addictions Research Centre since 2009. Since 2011, she has also been a lecturer of Forensic Psychology at the University of Prince Edward Island. After completing her undergraduate degree at St. Francis Xavier University, she began graduate studies in Forensic Psychology at the University of British Columbia. She completed her Masters in 2003 and her Ph.D. in 2009, both under the supervision of Dr. John Yuille. Mentored by Dr. Yuille, her research interests include autobiographical memory, suggestibility, investigative interviewing, and credibility assessment. Her Masters research investigated eyewitness identification performance in a group of adults with intellectual disabilities, while her dissertation explored verbal credibility in the memory accounts of violent offenders. Dr. Yuille instilled in Dr. Ternes an appreciation for the importance of ecological validity in forensic psychological research, values which Dr. Ternes practices and advocates in her current positions. When Dr. Yuille retired in 2007, she was part of the team that organized a Festschrift conference in his honour, which led to the present volume.