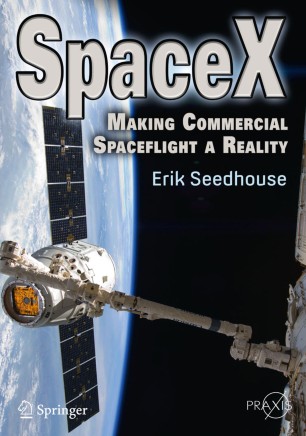 2012 - the year when the first ever privately-developed spacecraft visited the International Space Station.

This is the story of how one company is transforming commercial space flight. It describes the extraordinary feats of engineering and human achievement that have resulted in the world's first fully reusable launch vehicles and the prospect of human travel to Mars.
SpaceX - The First Ten Years:

- explores the philosophy behind the success of SpaceX;
- explains the practical management that enables SpaceX to keep it simple, reliable, and affordable;
- details the developmentof the Falcon 1, Falcon 9 and Falcon Heavy rockets and the technology of the Merlin engines;
- describes the collaboration with NASA;
- introduces current SpaceX projects, including the Grasshopper reusable launch vehicle and the Stratolaunch System.

SpaceX - The First Ten Years is a portrait of one of the most spectacular spaceflight triumphs of the 21st century, one that is laying the foundation for humanity to become a spacefaring civilization.

Dr. Erik Seedhouse worked as Astronaut Training Consultant for Bigelow Aerospace in 2005, a company for whom he wrote the Spaceflight Participants Flight Surgeon’s Manual. He also developed astronaut-training protocols for future spaceflight participants and wrote and edited several chapters of Bigelow Aerospace’s Astronaut Training Manual. Erik is a research scientist specializing in environmental life sciences and physiology, the subject in which he obtained his Ph.D. in Physiology while working for the European Space Agency between 1996 and 1998. In 2009, he was one of the final candidates for selection as an astronaut in the CSA’s Astronaut Recruitment Campaign. He is the Training Director for Astronauts for Hire (A4H) and is the Canadian Forces’ High Risk Acceleration Training Officer, which means he spins CF pilots in Canada’s centrifuge. He is the author of several space exploration titles, and his most recent “Astronaut’s for Hire” was published in January 2012.