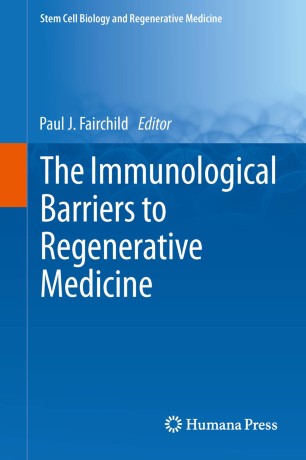 The Immunological Barriers to Regenerative Medicine

Recent years have witnessed numerous advances in stem cell research that have suggested novel strategies for the treatment of the chronic and regenerative diseases that pose a growing challenge to the provision of healthcare in the 21st century.  Nevertheless, there is little doubt that related disciplines have failed to keep pace with such developments, of which the immunology of transplant rejection is perhaps the most relevant to the nascent field of regenerative medicine.  Indeed, given that after decades of research into the mechanisms of organ allograft rejection, we remain wholly dependent on immune suppression to ensure acceptance of foreign tissues, we might legitimately ask whether there is any reason why tissues differentiated from stem cells might not suffer the same fate.  This volume seeks to address this issue by drawing on the principles of alloantigen recognition to assess the validity of early convictions that embryonic stem cell-derived tissues may prove invisible to the immune system of the host and the more recent belief that induced pluripotent stem cells, derived in a fully autologous manner, will circumvent the issue of immunogenicity.  Having debunked such assumptions and established the magnitude of the immunological barriers to be overcome, this book then draws on the expertise of internationally-recognised laboratories around the world to provide a critical assessment of the likely success of applying strategies such as stem cell banking, silencing of genes that confer immunogenicity, and the induction of transplantation tolerance to overcoming the immunological barriers in the future.  Indeed, it is only through reaching a consensus in the field that enduring solutions to such an intractable problem may ultimately emerge.

Dr. Paul Fairchild began his research career in Oxford, where he studied for a doctorate within the Nuffield Department of Surgical Sciences, where his research focused on the immune response to organ allografts.  After spending five years as a post-doctoral fellow investigating the etiology of autoimmune disease in the Department of Pathology, University of Cambridge, he returned to Oxford, where he is currently a University Lecturer in Pre-clinical Medicine within the Sir William Dunn School of Pathology and a Fellow of Trinity College.  In 2008, Paul Fairchild founded the Oxford Stem Cell Institute (OSCI), for which he currently serves as Co-Director.  As a highly interdisciplinary organization, the OSCI focuses on exploiting the properties of stem cells for the treatment of some of the most intractable chronic and degenerative diseases.  It is within this context that he continues to apply his background in transplantation immunology, in order to investigate the nature of the immune response to tissues differentiated from pluripotent stem cells, and develop approaches to the induction and maintenance of immunological tolerance.