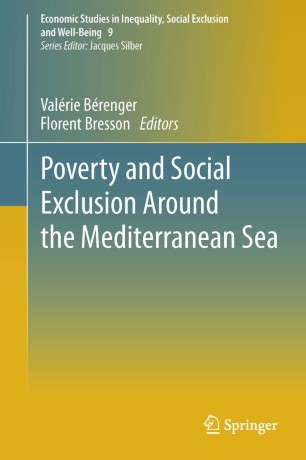 Poverty and Social Exclusion around the Mediterranean Sea

The events taking place in several of South Mediterranean countries since December 2010 show that multiple deprivations may be powerful drivers of political instability. Though improvements of the living conditions have been regularly principal demands along with civil and political liberties in the demonstrations, one of the main striking facts about this so-called “Arab Spring” is that poverty had not been given the same emphasis in southern Mediterranean countries during the last decades as in other areas of the developing and emerging world.

Although the growing recognition that poverty is a multidimensional concept, studies of poverty in South Mediterranean countries have often been dominated by a monetary approach. However, there is a growing evidence that it is suitable to go beyond the money-metric measures of poverty and to supplement its results with other approaches that adopt a broader definition of well- being. Though poverty is only one of many causes of this “Arab Spring,” we argue that it is a key feature to understand these historic events and that it is necessary to draw a detailed picture of poverty and social exclusion for each one of these countries. Moreover, if the Union for the Mediterranean succeeds in fostering economic cooperation within the Mediterranean area, the focus on the population’s well-being of its southern members will deserve scrutiny in the next few years to understand the forces that will drive the Euro-Mediterranean relationships, in particular for migration issues.

This book brings together recent advances on the measurement of poverty with empirical applications on South-Mediterranean countries. It introduces new tools for analyzing poverty and shows that the linkages between income and well-being are not straightforward and hinge on many determinants. It shows that the efficiency of poverty reducing policies should also be assessed on the basis of the satisfaction of non-income needs like health, education or participation in social life.