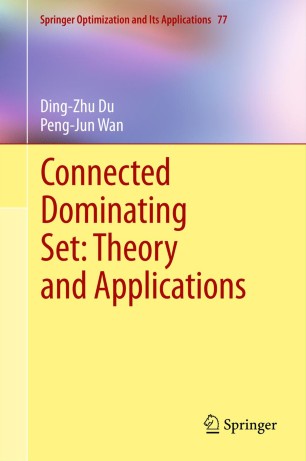 Part of the Springer Optimization and Its Applications book series (SOIA, volume 77)

The connected dominating set (CDS) has been a classic subject studied in graph theory since 1975. It has been discovered in recent years that CDS has important applications in communication networks —especially in wireless networks —as a virtual backbone. Motivated from those applications, many papers have been published in the literature during last 15 years. Now, the connected dominating set has become a hot research topic in computer science. This work is a valuable reference for researchers in computer science and operations research, especially in areas of theoretical computer science, computer communication networks, combinatorial optimization, industrial engineering, and discrete mathematics. The book may also be used as a text in a graduate seminar for PhD students. Readers should have a basic knowledge of computational complexity and combinatorial optimization.